Alongside the Great Ruaha River, which winds through the Southern Highlands of Tanzania, is an ancient baobab tree. It isn’t the largest baobab tree, and from its size one would think that it was only a few thousand years old, rather then the hundreds of thousands of its true age. Around it are larger trees. Spreading acacia’s with their delicate leaves much favoured by giraffe, the tulip tree with its bright red flowers tall iron wood trees, their smooth trunks like pillars holding up the sky.
In fact, you would hardly stop to spare a glance at the old baobab, unless you happened to be there on a rainy day, when the leaves on the edge of it finger like branches turn golden and the old baobab becomes the most beautiful tree in the world.

Lost it time is the reason why the baobab was turned up side down, so it stands along amongst trees with its roots pointing at the sky. Legend has it that once when sinister forces tried to steal the earth, the baobab was created with its enormous trunk to stand as a fortresses to hold the earth together, it roots pointing to the sky so there wasn’t anything for the forces to hold onto, its smooth bark impossible to grasp. Other trees respect the baobab’s, leaving space for them to grow.

The golden baobab, however, is even more special.

The rains were late and the animals of Ruaha were beginning to wonder if they shouldn’t start the long dangerous journey north to find water. The Great Ruaha River was a small trickle, guarded by lions who only moved when the big herds of elephants came to drink. Even the elephants were beginning to worry as the skies remained blue and there was no smell of rain on the wind. Fire became a worry as the last remaining grass was yellow and hard. Dust billowed into the sky from the feet of animal herds as they milled around nervously.

The leader of the Ruaha hippo’s lay at the foot of the baobab wondering how she would keep her family alive as the waters dried. The trip to lake Victoria in the south was too far and the merciless son was burning the skin of the hippo’s. The lions were attacking any youngsters who moved away from the herd and the lack of grazing was making them thin and weak. Never in all her years had she known the rains to stay away for so long.

The baobab felt the concerns of the hippo, as being so old it hadn’t noticed that the rains were late. It’s branches devoid of leaves didn’t wilt without water, and it had enough water in its trunk to last many seasons. Fire, however, was a danger and it could sense the dry grass and how the hungry flames would sweep through the valley killing everything before it.

The baobab asked the trees around it to pass on the message to other baobab trees to see if someone knew why the rains had stayed away from Ruaha.

The skies remained blue, the water in the river dried up and the animals clustered around the few water holes where the elephants had dug down to find what water there was under the soil. The hippo’s were scared from the unrelenting sun and trees around the baobab began to die. Slowly news came to the old baobab that the cause of the rains staying away was that the rainbow and gone missing and the clouds were out searching for their friend.

No one seemed sure whether the rainbow had managed to get lost, or if it had been stolen. It had never happened before and if the clouds from their great height in the sky couldn’t find it then could anyone?

The Baobab listened to the gossip of the birds that sat in its branches as the days passed and there was still no news of the missing rainbow. On the wind, stories of fire could be heard and the baobab knew that it would have to do something to find the rainbow.

That evening, the baobab discussed the missing rainbow with the wise owl who nestled in one of the holes in the trunk of the baobab. They talked about what could have caused the rainbow to get lost, or if it had been stolen, who would done such a thing? The owl mentioned that there was a story that the thunder had been angry with the rainbow who had been showing off with the lightning and maybe the thunder would know where it was?

With no clouds, how were they to get hold of the thunder, as it was only around when the clouds came to visit. The Fish Eagle said that it would fly in big circles calling out to the thunder to see if it could tell them where to find the rainbow. Throughout the day the call of the Fish Eagles could be heard above the Ruaha.

In the evening the Fish Eagle landed amongst the branches of the baobab to tell them the thunder had answered from a great distance that it was busy and that he was still angry with the rainbow, but would send clouds back to try and find the rainbow.

The animals of Ruaha looked up the next morning to see clouds in the sky for the first time in months and hoped that this would bring the much-needed rain. All that day, and the next, the clouds searched for the rainbow but couldn’t find it, and decided to go away and look in another place.

The Baobab didn’t want to clouds to leave and asked the owl to talk to the clouds to see if it couldn’t persuade them to rain a little bit as he was sure that the rainbow would come out from where it was hiding to dance in the rain. The clouds wanted so much to have their friend back, that they agreed to rain for a bit and so it began to rain on the dry soil of the Ruaha.

As the rain fell, from a small cave in the mountains the rainbow sprang, into the sky to meet its friends.

Thunder came rolling across the sky, in a big black cloud to find out where the rainbow had been hiding? The rainbow said that it had been dancing in the rain one day, and then found that once the rain had stopped and the sun came out it could form a beautiful big colourful arch across the sky. But when it stopped the clouds had moved and it didn’t know how to find them again.

The old Baobab spoke with the thunder, suggesting that to stop the rainbow from getting lost again, it should live in the centre of the baobab where there was a big hole that only the sky could see into. Then whenever the clouds needed the rainbow they could call out to the baobab and the rainbow would join them.

And so the rainbow came to live in the old Baobab next to the Great Ruaha River and it still lives there, as the leaves of the old Baobab are golden. 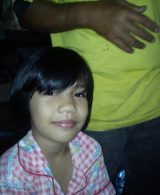