We are doing our best to share the dinner duties around amongst the guys who are camping in the houses at Juba 3. Something that we may change in the next few days as we expect another three to be coming in which will make a cook necessary. However, for now, I think there is something of a Cooking Innovation War going on.

Without a stove, Eddie and Nick cooked the rice in a pot, supported by four tuna tins and heated by tea-light candles. They did cheat a tad by first boiling the water! Their curried lentils and kidney beans were done in the microwave, and to stop the bowls from burning their hands to pieces, they used a second bowl as an insulation shell.

My cheese, provita, pate and wine did not even get onto the innovation scale.

Sprinkled through the reporting on the current conflict in South Sudan, references are made to the role of prophecies. Much do this goes back to the predictions by Ngundeng Bong, born around the 1840’s from the Nuer tribe. He predicted, through song, the coming of the white man to Sudan and the separation of North and South with military success for the South.

The link between his predictions and the current crisis is partly due to his “dang”, a rod that symbolized his power that was returned to South Sudan in 2009 from London where it had been taken by British troops around 1929, and Machar (the leader of the current Rebel forces) who has claimed to be part of the prophecy.

At the office, we have very few staff at work, with most still ensuring the safety of their families given the reports of soldiers moving on the outskirts of Juba Town. The tukal is being rebuilt with thatching guys performing their miracles with grass. 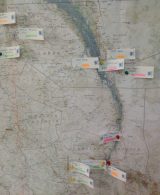