Eddie’s innovation dinner was to use an induction pan that works, with a pot (that doesn’t work on the induction hob) inside it to cook the pasta sauce.

We are waiting for confirmation of the ceasefire between anti and pro government forces, while there are reports that the pro-government forces have retaken Bor, assisted by Ugandan forces. In Juba, shooting was reported from High Malakal, with everything calm.

On the streets of Juba Town rubbish was being collected, and sweepers were out cleaning the sand from the roadside.

A painting of huts taking shape on the easel that reminds me of Monet’s haystacks. 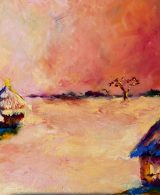