Long night with the team, being available to talk. Endless wait in Entebbe for the flight and then total chaos at Juba Airport. No aggression. Simply chaotic as luggage from the arriving flights was stacked in mounds where it was impossible to get to between the crush of people, customs inspectors and the great big X-Ray machine that wasn’t working. The sun blocked out by the incredibly tall South Sudanese, who formed a wall of black skin covered in brilliantly coloured fabric.

Our program lies shattered across the breadth of South Sudan. Numbers showing the harsh reality of a lost dry season and the security crisis that continues to limit our ability to work. Creativity stretched in finding working methods to respond effectively to donor requirements and work schedules, already delayed by months. The balance between resources, reality and the building work load that is waiting for the first opportunity to unleash itself on our ragged operation. That spirits remain high, and there remains such willingness to find the craziest of ways of getting access to remote parts of the country, only highlighting our lunacy rather than tenacity.

I slept well despite the large volumes of snoring coming from the 3 guys spread around the lounge. Shower juggling time with guys trying to find their bits in their suitcases while finding space to hang towels and place the various toothbrush and shaving bits. They certainly don’t design bathrooms for this.

Took myself off for a jog on a cool morning with the sunrise. Sporadic gunfire in the distance, with the birds and barking dogs the sounds of Juba Town waking.

We have moved people around offices, sorting out the accumulated clutter that seems inevitable. One office, with four people had 18 staplers, with umpteen boxes of pens and pencil. While another had three copiers and six printers.

The refurbished Tukal is operational and I’m again able to get an omelette for breakfast and chicken for lunch. Its clean, functional and almost hygienic.

Around Juba Town, the morning traffic is back to its chaotic best. With roads shrouded in dust, they are selling red Valentines roses.

Time to sort my next painting. 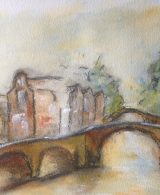 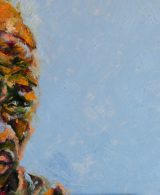