A hot afternoon in Juba Town, with the sound of small arms fire a background to the music of Dr John. The house smells of linseed oil from my painting of a young boy with his wheelbarrow, carrying goods to the IDP camp from the taxi stop.

My painting, done with my mind conscious of the new direction our lives have taken as we have bought a property on Thyssen Island in Knysna. Up the East Coast of the Southern Cape, its on a lagoon bounded by mountains covered in indigenous forests that still contain forest elephants. Every bit as idyllic as it sounds. The property is currently used as offices and the idea is to convert the bottom story into an art studio-gallery, and the upper part into a loft apartment.

The market is busy, children are in school uniform, kids swim in the water holes following the rain, traffic police are back to create their special brand of chaos. Signs that Juba Town is returning to normal. Women sit on the edge of the road, dressed in bright kangas. Plates of stacked fruit for sale, their fingers crafting embroidered cloths.

Morning jog with the sunrise, an owl silhouetted against the moon. Kids story book stuff.

I took my phone with its movement app on my jog and was glad to find that my route is almost 5km and not the 4km I thought it was. Silly difference, but made my times a tad on the running side of a jog, rather than the walking side. Managed to trash my Achilles again which doesn’t impress me.

Demanding days navigating the continually shifting landscape while squeezing numbers into ever more improbable contortions, messing with my sleeping patterns. The new offensive launched in Upper Nile with tanks and heavy weapons isn’t making it any easier. At least the early hours gives me the chance to see the full moon. 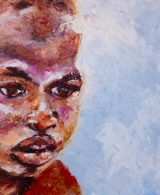 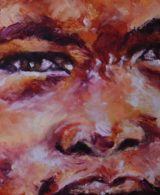