Arrival in Juba Town a tad stressful as Immigration and Security officials did their best to make the entry into South Sudan as unpleasant as possible.

Early start made possible by sleeping at the office. The cold shower still not my best start, even if the outside temperatures are on the ‘warm oven’ side of the scale. I slept well, with the added advantage of having a core muscle workout and my skin exfoliated by the trampoline like spring and coir mattress.

Juba Town. The Internet tragic. The covered patio of the Juba 3 house flooded. An indication of the severity of the storm that swept over Juba Town? I haven’t seen what the impact the storm had on the temporary shelters in the IDP camp, but they may have been protected by the high earth walls that surround the camp to keep them safe from stray bullets. For now, the evening is still, with only the frogs tuning their vocals.

During the storm, a bolt of lightning struck the office building, and the sound of the rain was punctuated by falling mangoes that crashed onto the roof. Noisy it was. Amongst the rain and lightning, I had staff scurrying about in the mud collecting the fallen fruit.

Difficult week in South Sudan, with fighting in Unity and Upper Nile. Shooting at the PoC in Bor following demonstrations. Reports of fatalities has again escalated tension towards the UN, with possible spillover to the PoC areas in Juba. A tad unsettling.

Quite a number of people out jogging on the roads within the UN House base. I managed a short jog, with a spectacular sunrise, and noisy birds. My Achilles didn’t even scream. Must be the blue colour of the strapping.

The radio, phone and email is quiet which is an indication that yesterday’s chaos hasn’t spread. The PoC areas in UN house seem still and I haven’t noticed any troop movements.

The sky is blue with puffy white clouds. Exactly what you would expect on an Easter chocolate box!

‘Shasta Daisies’, a painting from the cottage garden in summer. A peaceful, undemanding work and I’m thinking of hiding an Easter Egg somewhere in it. 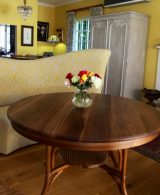 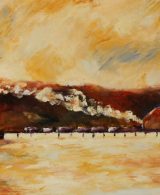