Up early, still dark, frogs and cricket sounds slowly giving way to birdsong. It’s perfectly still. Music, faint in the distance. Lacing on my running shoes, I can see the neon green stripe, which means its light enough to head out for my jog. No real painful bits this morning, which enables me to push the pace on the downhill section of the loop, almost getting to running pace. A far cry from my awkward shuffle normally associated with my jog. Must be that magic blue tape?

On the easel, I’m at war with my portrait of Mina. Subtle tonal and colour shifts across her face. Reflecting a bubbling personality honed in harsh world of domestic labour and a will of iron. Must be the iron will that is giving me such a hard time!

More violence rocks the country, with Juba Town eerily deserted. Fighting within the SPLA and reports of renewed ethnic killings have spread the crisis into another two States of South Sudan. While the recruitment of child soldiers isn’t a surprise, the apparent scale of the recruitment is another alarming story within this already mind-blowingly senseless war.

A rude awakening in the middle of the night, when a bunch of clouds surrounded the house and then clapped their hands, hard, shaking the building. A few tears of laughter from the clouds, before they headed off to repeat it at another house.

The morning, humid for my jog, which meant I spent half the day oozing moisture as my body struggled to cool down. A spare shirt a necessity.

From Rula, an Arabic spice called za’tar. Thyme, with sesame seeds, it’s used with olive oil and bread. In Juba Town, I’m using it on cheese with Provita.

A fiery evening in Juba Town. Eddie has this habit of asking for extra chili when he orders his food, particularly on the pizza he selects that already has amounts of chili included. With my dinner order, they obviously decided to be customer focused, and proactive, loading my pizza with chili. Fiery it was!

Each morning, they move the cattle out from their evening stockade alongside the main soccer stadium, to their pastures along the river bank. I wanted to capture the fiery sunrises we are getting in Juba at the moment, as well as the uniqueness and central role that cattle play in the life of the South Sudanese. Hence I kept the cattle herder insignificant in the painting. 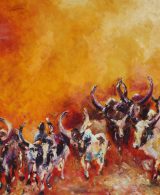 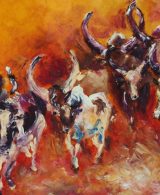