Our water is so bad at the moment, I’m not sure if my hair is cleaner or dirtier after my shower.

My ‘adventurous’ pallet was tested by the breakfast Salah prepared that had elements of Egyptian cuisine in it. The olive, rice and onion dish, served with Spanish omelets was sharp and more than a wake up. For the traditional after the meal fruit, he served ‘Khoshaf’ with coffee. Dates soaked in milk. While certainly no date fan, it was amazing, if rich. Excellent for that 2am, jet-lag boost.

I have been a tad disappointed at the depth of colour in some of my paintings. Perhaps underpainting with contrasting colour is the reason? It makes my single session painting more difficult, as the underpainting has to dry. A couple of paintings on the easel. Small works, with the sunset skies, Turner tantilising, over Juba Town that are so amazing at the moment.

After a twelve hour sleep, I put my head down and did my painting before the patio got too hot. The sun has moved so that in the afternoon its in full sun. Great for drying washing, but not great for painting!

‘Juba Town’, from a photo by Elke. The road outside the UNOPS compound leading up to the banking sector. Remnants of Colonial Architecture remain amongst the emergence of glass and plastic. The painting a tad nostalgic and romanticised. Juba Town scrubbed clean by afternoon storms. An escape from the harsh reality of guns and cholera.

The Dave Brown guys have commented on three of the paintings I submitted. Great that they highlighted so many and we will see if I get to the finalists. They have also asked what are my three goals for my art, which is sort of troubling. Sometime around midnight, I decided on:
1. Art Gallery open with a curated Annual ‘Dave Brown’ type competition
2. Yearly mentorship program for local emerging artists supported by galleries in Knysna
3. Linking paintings with stories

I also sent a bunch of elephant pictures to the Royal Society of Wildlife Artists for a bit of variety.

The calm of Juba Town turned into chaos with streets blocked by soldiers conducting random searches. The crazy drivers the biggest threat as they remonstrated with the soldiers and confidently tried to squeeze their vehicles into nonexistent spaces. The traffic policemen were humerous in their efforts to disentangle the knots.

Afternoon jog in Juba 3 as the heavy morning storm prevented me going out at first light. The air still heavy with moisture, I slogged my way around the circuit, running the last section with a bunch of guys who I don’t normally see out. Nothing like testosterone as a motivator! My magic blue tape giving me a bionic edge.

A night of rain and its still raining. Still, I slept well in one of the transit rooms we now have here at the office for people who are only spending a short time in Juba. It was basic, but comfortable. The matress having seen too many bodies, with that natural hollow that had me mountain climbing to change position.

No alarm needed, as the call to prayer was strident. No excuse for those who did not get up!

Laundry sorted, coffee machine cleaned, and for a week, this adventure is done. 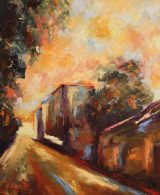 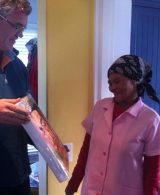