Juba market, bustling with bright umbrellas shielding merchandise from the sun. Boda-boda drivers slouched on their metal machines, their Hip-Hop dress style creating their own tribe.

Boy Scouts, an unexpected normality, amidst the vigilance for speeding vehicles carrying sunglass preening Presidential Guards. New recruits, resplendent in new track suits, on their formation run through Juba Town. An indicator of military preparation for a new offensive in the dry season?

A surprise to find no water at the house after my jog. Fortunately I was able to shower at the office and they have fixed whatever the issue was.

On the easel a painting of a man tilling a field in Piedmont. The colours, movement of the grass and white wild flowers reminiscent of Cézanne.

Muddy, humid jog, with light rain falling between storms. Fortunately we managed to move the bags of the people who were staying here into their containers before the storm broke. The sky still growling and it doesn’t feel like its going to stop for quite a bit. No fun in the PoC’s.

‘The French Bougette’, emblazoned in lime green and yellow on a roadside stall outside UN House has opened. Loaves of bread, stacked like cordwood, replenished in the morning from a little white van sporting the green and yellow colours of the bakery.

Murderous skies on our way back from the office. Water pouring from the skies over Juba Town. The downpour such that the perimeter security wall at the office collapsed. With the rain, it’s fabulously cool. A few leaks that tend to drop cold water at odd times down my back, or onto my head keeping me alert while smearing paint about the place.

Going to blame the breaking of my last (of two, that have survived two years in Juba Town), red wine glass, on my 3am wake up and not on having too much wine. 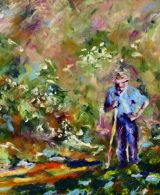 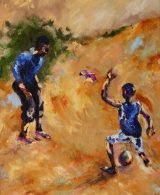