In the late evening hours, the air vibrating with pulsating drumming and singing from the PoC. Haunting. Ethereal. Captivating.

Chest heaving, legs screaming. First jog after the holidays. The route busier than expected. Ego forcing the pace above the sensible. The air cool after the overnight storm, with owls hooting encouragement, as I splashed my way through the muddier bits

A quick breakfast and then the short trip to the airport. The security check guys didn’t like any of the stuff in my suitcase, so I had to unpack the whole thing. Explain about the tubes of paint. What a Nespresso capsule is (with the aid of the website). Unwrap the hunk of cheese, let them taste the chocolate buttons and switch on the electric toothbrush so they could see that it worked. Amazingly I was able to get everything repacked.

Not the best news to wake up-to. The report of a construction failure of one of the structures we are building. Very embarrassing and fortunately no one injured.

During my pummeling about the failed structure by the State Ministers, there was appreciation for us implementing projects to the benefit of the people of South Sudan, in the difficult conditions, and our willingness to work during the conflict. ‘If you hadn’t tried, even if you failed, we would have nothing at all. Even if its now only to criticise’.

They did mention that there had been no cognizance taken of local traditions and rituals, which may have been the cause of the failure. ‘You can’t cross the river if you aren’t right within yourself. The river will pick you up and carry you back to where you started!’

At some of the intersections in Juba Town, they have placed circular steel structures that have a conical shape to a small platform on which a figure of a man stands with a bow and arrow. Apparently this may depict the various tribes of Central Equitoria State, where hunting with bow and arrows is still practiced.

Nepalese Peace Keepers out for their morning run. They seem to be mad football players and practice all sorts of drills between sprint sessions. The Ghanaians in comparison are built like Michelangelo’s David. Their muscular bodies encased in the tightest clothing possible, transparent with sweat. They run like the wind, with an assortment of headphones colour coordinated to their outfits. My jog. Pedestrian.

My next painting options swirling around my head. 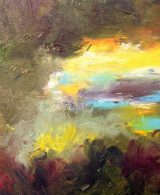 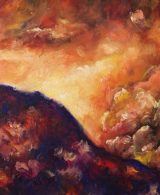