Red skies at first light, with the call of a coucal on my jog. An extra loop tagged onto my long route, to take me back past the pond where water lilies are flowering.

Singing and drumming from the PoC. The background thump of a donkey generator. Very special. Even after another twenty hour day.

At the traffics lights, which continue to cause traffic mayhem, we now have street kids selling boxes of tissues and withered old crones clutching sticks for support, ruthlessly exploiting the vehicle jams. Petrol queues forming again, with some enterprising soul running a car wash service.

On the easel, a painting of rural South Sudan, Eastern Equitoria countryside, reminiscent of a Thomas Baines landscape.

Using the amazing skies over Juba to create the movement his paintings are known for, as well as colours that mimic his palette to communicate the harshness of the light over Africa. Prussian blue, Venetian red, crimson, emerald green and chrome yellow. “I only wish I could deem myself able to paint nature as bright as she is,” he wrote.

A touch of Cezanne in the sky and lightness of the trees.

‘Thought-storm’ mayhem getting me up in the early hours as I contemplate the next phase of adventures. The morning cool for my, almost, run. Troops from the contingent in a formation run at a pace that was manageable, enabling me to tag along. My legs hurting as they charged over the undulations. Drumming and singing from the PoC, an unrelenting cadence.

In Juba Town, police are removing the license plates from vehicles that are illegally parked. Not sure what the process is to get them back!

Woke to an emphysema type cough, without the TB style rattle that isn’t, thankfully, simultaneous with cracked ribs! My head a tad more vacant than it normally is, and my reaction times are almost at Knysna pace.

Tea, rather than wine. Tragic state. 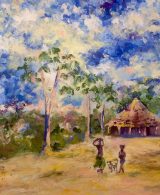 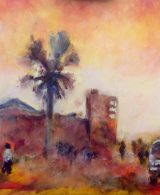