Warm late summer days in the vineyards. Fish Eagles calling from blue skies. Unhurried dinners watching the stars come out as the evening cools enough to warrant a rug for that last glass of wine.

Polly up in the early hours, disturbed by the bushbuck wondering through the garden.
‘End of the Season’ Oil on Canvas. The cottage full of the smell of linseed oil and wet paint from my canvas of the harvest in Stellenbosch.
As the harvest nears its end and the vines begin to change into their gold, maroon and yellow colours, so our time in the cottage runs down.
Skies shrouded in smoke. Air tainted with charcoal. Red sunset, pales as fires rage. Flames visible from the vineyards, burning from Tokia across the Constantiaberg. Devastating.
The blue seas at Hermanus calming after the drive through burnt mountains. Crews hide in the shade thrown by their fire trucks, legs sprawled between empty food containers, while smoke coils into the superheated skies.
The unusual sight of a Cape Cobra on the patio. Efficiently caught by a couple of crazy guys who moved the sofa, behind which it was coiled, and calmly picked it up by the tail before dropping it into a cloth bag. Not something for the faint hearted!
On the weber, slow-roasted halved brinjal with ribs, using the Blue Sky organic salt, it’s chilly bits adding a gentle zing to the brinjal. Brinjals are not on my favourite list, however as they were featured in the Taste magazine, and cost almost nothing, it seemed with a try. The unlabeled Spookfontein red blend was great, however the Chardonnay (not my favourite wine) from Lismore Estate in Greyton was sensational.
On the easel, a painting of Elephant Dual that was damaged when we moved from Tanzania. A few adjustments needed to fit the different sized canvas.

Slow-roast halved brinjal on the weber

1. Prepare an Indirect fire on the Weber: A medium fire (300 C) is needed. About 45 minutes from lighting.

2. Prepare the Brinjal: Cut the stem end and bottom off the brinjal, then cut it in half lengthwise. Score the flesh with a knife, cutting deep into the flesh but not through the skin. Cut diagonal lines going about an inch apart, then turn the brinjal around and cut again so you have a diamond pattern. Rub salt into the flesh and let it stand for 30-45 minutes. Then rinse off the salt, and pat dry with a paper towel.

3. Roast the Brinjal: Brush the flesh with olive oil and cook face-up on an indirect fire with the lid on for 35-40 minutes.

4. Let the Brinjal Cool: Let the brinjal cool for 10 minutes, finishing off with a scattering of basil oil and parmesan cheese. 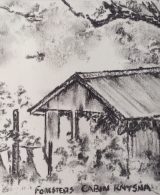 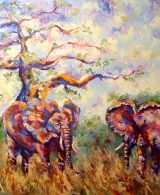