Charles Guilloux, a modest employee at the Bibliothèque Nationale, was a self-taught artist placed in the Symbolist movement by the critics of the time. From 1891, his works were successfully received at exhibitions held by the Independent Artists Society, then, shortly afterwards, at the Impressionists and Symbolists exhibitions at the Barc de Boutteville gallery.

In a short time, the titles of his paintings became more and more elliptical, sometimes with musical connotations (Lunar Scherzo, 1894, location unknown), whereas their original subjects became less easy to identify.

Evening is an example of this, where a few dark trees on a barely visible strip of land are silhouetted against water and sky.

This structuring of space, this exaggerated separation of shapes and colour, as André Mellerio (1862-1943) commented many times in his The Idealist Movement in Painting (1896), can be found in other paintings by Guilloux from the same period: Moon rising over a Canal (Moulins, Musée Anne de Beaujeu) and Evening Landscape (Beauvais, Musée Départemental de l’Oise).
Evening, and these two other paintings, appeared in Le Barc de Boutteville gallery in 1892, attracting this comment from an anonymous critic of the Temps: “A magnificent series of landscapes sent in by an unknown who is a master”. 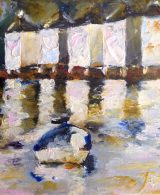 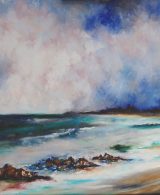