Paul Cornoyer was an American Impressionist style painter famous for his paintings of New York and its suburbs. He was born in St. Louis, Missouri and went to Paris to study at the Académie Julian in 1989. The artist was awarded the prestigious Associate American Academician title in 1909 and his New York city and park scenes gained him acclaim and special attention. These are meticulously observed. His color scheme deliberately limited to the context of each painting.

Many of Cornoyer’s New York City urban and park scenes are readily identifiable with such subjects as Washington Square, Bryant Park, Central Park West, Columbus Circle and Madison Square. Cornoyer was particularly skilled at rendering the reflections of rain and wet streets or the soft calm of snow covered winter parks.

His work is scattered throughout the country in Art Museums in Brooklyn, Dallas, Kansas City, Newark, and St. Louis. Paul Cornoyer was a much beloved teacher. For most of his life, he taught at the Mechanics Institute in New York, and later in 1917 in East Gloucester, Massachusetts. At the time of his death in 1923 he was involved with setting up an exhibition for the local art association.
artnet.com 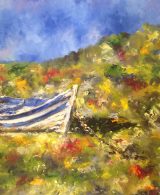