Joaquin Sorolla y Bastida (1863 – 1923), a post-impressionist artist from Spain, who had two passions in his life – his family and his art.

He began to study painting at the age of fifteen in his native Valencia, Spain. At the age of eighteen, he went to Madrid, where he copied Old Master paintings in the Museo del Prado. Four years later, Sorolla won a grant to study painting in Rome; there he developed a distinct ability for depicting the effects of light.

When Sorolla returned to Madrid, his paintings were in great demand. Most of his pictures were painted in from four to six mornings, many in one or two.

He painted very, very fast. “I could not paint at all if I had to paint slowly,” he once said. “Every effect is so transient, it must be rapidly painted.” In the studio Sorolla would sometimes use a palette the size of a grand piano lid and 3 foot long brushes to allow him to stand back from his painting.

Sorolla’s widow left a large collection of his paintings to the people of Spain. The collection is now a museum, the Museo Sorolla, in the artist’s house in Madrid. 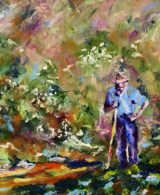 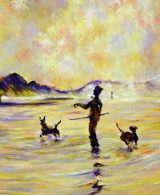