Marie in the garden (also know as The Roses)

The artist’s wife, Marie, walking in their garden at Skagen. At the birth of their daughter, Vibeke, in January 1895, they had rented the chief bailiff’s official residence at Skagen (known today as Krøyer’s house) for peace and quiet.

Although artists such as Rørbye and the marine painters Vilhelm and Fritz Melbye had been to Skagen in the 1830s and 1840s it was not until the 1870s, with the rise of nationalism and the rejection of the academic and foreign Dusseldorf school, that Danish artists set up an artists’ colony on the most northern peninsular of Skagen in Denmark. It was to become the most important artistic colony in Scandinavia.

Hans Christian Andersen remarked in 1859, ‘We will visit this far-flung corner of Denmark, a desert between two roaring seas, the town which has neither streets nor alleyways, where seagulls and wild geese fill the air over the undulating sand dunes and the church buried beneath the encroaching sand. Are you a painter? Then make your way up here, for there are motifs enough for you, here is scenery for poetry; here in the Danish landscape you will find an aspect of nature which will give you a picture of Africa’s desert, of the ash heaps of Pompeii and of sandbanks in the great ocean above which birds soar. Skagen is worthy of a visit!’

Krøyer, a Norwegian by birth, had travelled and studied extensively in Germany, Holland, Belgium, Paris (where he enrolled in the studio of Léon Bonnat), Spain, Italy and Austria. His first visit to Skagen, in June 1882, was not a success, for the weather was wet and stormy and the hotel as ‘uncomfortable as possible’.

Whilst in the 1870s Krøyer looked back at the Golden Age of Danish painting, the French Impressionists greatly influenced his work of the 1890s. Krøyer had returned to Paris in the late 1880s and the French exhibition in Copenhagen, with works by Sisley and Monet, had had a profound influence.

Probably Krøyer’s most famous painting, Summer evening in Skagen, depicting his wife with their dog at the water’s edge, was painted in 1892. By now his preferred model was his wife Marie and in 1893 he painted several important portraits of her; sitting in a deck-chair in the garden of Vester Bentzen’s house (The Hirschsprung Collection), strolling along the South beach with Anna Ancher, and in Roses, Garden view from Skagen, now in a private collection.

In 1899 Krøyer had painted Summer evening on the beach at Skagen, The painter and his wife (The Hirschsprung Collection, fig. 2), which seems to reveal the tension between them after ten years of difficult marriage. Both were not well; Marie suffered from bad nerves and headaches whilst Krøyer suffered from depression and had been admitted to hospital. She eventually left him in 1903 and Krøyer, in spite of remissions, never recovered his mental health, dying in 1909 with his daughter and the Anchers at his bedside. 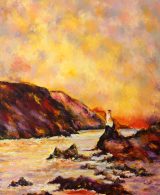