The art of Stanislas Lépine joins the pre-Impressionists with the Impressionists. Lépine established his reputation with views of Paris and paintings depicting life on the banks of the Seine imbued with an atmosphere unique to his oeuvre. Although he gained little recognition during his lifetime, Lépine was highly regarded by his fellow artists and, in 1874, was invited to exhibit in the first Impressionist Exhibition.

Lépine was born in 1835 in Caen, Normandy, to a family of cabinet makers. A pupil of Jean Baptiste Camille Corot, he exhibited at the Salon in 1859 and during the early part of his career Lépine benefited greatly from the patronage of the collector Hazard and his friend Comte Doria.

Being from Normandy, water would always play a pivotal role in Lépine’s artwork.  In addition, he admired the Dutch painter Johan Barthold Jongkind (1819-1891), and was especially influenced by his marine pictures, which brilliantly captured the effects of air and atmosphere, as well as by his moonlight views.

The critic Georges Lecomte said of him: ‘Il était unique, le direct élève du divin Corot’ ‹‹to ruin the academic landscape by learning how to render the effects of light and atmosphere››. The influence of Johann Barthold Jongkind was also very strong, this can be seen particularly in his choice of subject matter and use of light. Lépine was a consistent artist and his style hardly changed after 1869; as a result his works are difficult to date.

Stanislas Lépine died at the age of 57, almost totally paralysed; he was so poor that his friend had to make a collection to pay for his funeral. After his death Lépine’s work began to gain some of the critical acclaim that he so richly deserved and a retrospective exhibition of his work was held at Durand-Ruel in December 1892. 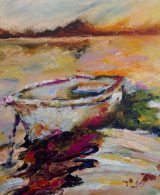