One of the great exponents of expressionism, the Dutch painter, Kees van Dongen achieved fame both as a member of the Fauvism movement and the German Expressionist group Die Brucke. He is best known for his paintings of women, nudes, dancers and society portraits.

Kees van Dongen was born at Delfshaven near Rotterdam in 1877; his full name was Cornelis Theodorus Maria van Dongen.

He earned his livelihood working for the magazines “Groene” and “Rotterdam Neusblad.” His racy drawings of life around the habor were published with great scandal. In 1897, he went to Paris, where he lived in Bateau-Lavoir. There he worked as an illustrator for “Revoue Blanche” and “L’assiette au Beurre.” In 1903, van Dongen exhibited his works publicly for the first time, and later he showed with Matisse in the Vollard Gallery. The Dutch painter became associated with the group “Fauves” (wild beasts) in 1905.

Nonetheless, his affinity for the German Expressionists can be recognized in his works. Indicative of his work is the intense use of color, which increased the expressiveness of his paintings. In 1908, he became a member of the group of German Expressionists “Die Brücke” (the Bridge) and exhibited with them. At the end of World War I, van Dongen was discovered by the upperclass. He then painted many portraits, becoming a chronicler of the 1920’s and 1930’s.

His expressive portraits, likenesses, and landscapes received much appreciation and achieved success through his unique coloring. 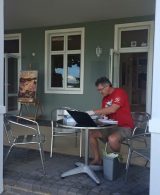 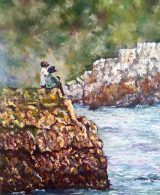