Konstantin Korovin, born in Moscow on December 5th, 1861, was a painter by vocation and, one can even say, by birth. It is with good reason that he has been called the greatest exponent of Russian impressionism. Indeed, analyzing Korovin’s oeuvre and reading his memoirs, one is led to believe that almost from the very beginning of his career, as well as in his approach to the world — to nature and people — the artist tried to capture first of all his impressions, his fleeting experience of things seen. When he began to study at the Moscow College of Painting, Sculpture and Architecture in 1875, he was seen by many as “different from others”, “foreign” and, taught the techniques of painting in the open air by Alexei Savrasov and Vasily Polenov, he was a decorative artist, fond of “colour spots” as a painting method.

The first years of the 20th century were undoubtedly the peak of his creative career. The peculiar features of the Russian Impressionist school became increasingly pronounced in his works of this period: the predilection for decorative effects, the emphatically expressive coloristic solutions and the pronounced romantic note. Korovin’s subjects were quite diverse, they included townscapes and rural landscapes, portraits and still lifes.

In his autobiography, Konstantin Korovin recalled how his professor Sorokin summoned him to the studio to show him his new landscape and to get some suggestions from his student as to why the painting was a failure. Korovin explained:

‘In nature everything is different in kind, and yet all the same. You see logs, glass in the windows, trees. But for me these are only paints. For me they are all the same – mere spots.’
‘Hang on, how can that be?’ said Sorokin. ‘I see logs – my dacha is made of logs.’
‘No. When one correctly applies paint, the logs emerge from the tones and contrast.’
‘Surely not,’ said Sorokin. ‘One must draw everything first, and then paint it in.’
‘No, nothing will come of that,’ replied Korovin.
‘Well, no wonder everybody scolds you. The drawing is primary in art.’
‘There is no drawing,’ replied Korovin.

In 1923, Korovin left Russia never to return. He spent the last 15 years of his life in France supported by Shalyapin, he worked for theatre as a stage designer. He also became famous as a book illustrator. 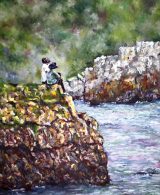