A German-Danish Expressionist painter and printmaker, he was a member of the influential Expressionist group, Die Brücke (The Bridge).

Best known for brightly colored portraits and peasant scenes (with a Primitivist slant) and for his interest in flowers, this work is a bit different.

In fact to me, this painting lives up to the name Die Brücke, for it bridges the Impressionist sensibility with the Expressionist lens. This night scene manages to blend Impressionism’s fidelity to the scene with the type of brushwork and coloring favored by Expressionism, and it is the marriage of these elements that gives the piece its power.

“There is silver blue, sky blue and thunder blue. Every color holds within it a soul, which makes me happy or repels me, and which acts as a stimulus. To a person who has no art in him, colors are colors, tones tones…and that is all. All their consequences for the human spirit, which range between heaven to hell, just go unnoticed.”

Emil Hansen was born in the village of Nolde near the Danish border in August 1867. At the age of seventeen he became the apprentice of a wood carver near Flensburg, while at the same time practicing his skills as a draughtsman. Between 1888 and 1891 he worked as a wood carver and draughtsman in furniture manufactories in Munich, Berlin and Karlsruhe. In the evenings he took classes at the arts and crafts school. Between 1892 and 1897 he taught technical draughtsmanship at the Industry- and Trade Museum in St. Gallen. He travelled to Milan, Vienna and Munich and through his many hiking tours developed a fascination with mountain scenery. Nolde designed postcards with caricatures of personified mountains which became such a commercial success that he cut short his apprenticeship and moved to Munich in 1898 to work as a painter. Although he was not allowed into the Academy he did study privately and went to Paris for one term to enroll at the Akadémie Julian. In 1901 he settled in Copenhagen. Here he met Ada Vilstrup whom he married in 1902. On the occasion of his marriage he changed his name to that of his birthplace, Nolde. He moved to the island of Alsen in 1903, but spent the winter months in Berlin where he rented a studio.

Through an exhibition in Dresden in 1906 the artists of the “Brücke” became aware of his work and invited him to join their association. For two years Nolde took part in the group’s touring exhibition projects and in 1907 he spent several weeks in Dresden. But at the end of the year he left the group – the differences in age and temperament were too substantial for the loner Nolde. In Berlin he painted the nightlife of the metropole and studied the art of indigenous peoples in the Völkerkundemuseum. In 1913/14, fulfilling one of his dreams, he and his wife accompanied a medical expedition to the South Pacific via Russia and China. A great number of watercolours was the product of this journey. In 1927 the Noldes moved to Seebüll where Nolde desinged and buildt a house and studio for himself. From 1931 on he worked on his autobiography.

For Nolde the Third Reich brought defamation. His paintings were confiscated from the museums and his work was a special focus of the exhibition “Entartete Kunst” (“Degenerate Art”). From 1941 on he was prohibited from painting at all. Secretly he paint small scale watercolours which he called “unpainted pictures”. After the war, between his eightyth and eightyfith birthday he gained various honorations and awards.

Nolde died at Seebüll in 1956 and was buried next to Ada in the garden of the Seebüll estate.
http://www.bruecke-museum.de/englnolde.htm&nbsp; 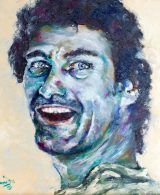 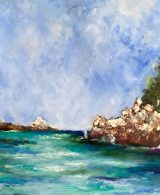