Wind buffeting the studio. Canvases dancing against the walls. Storm tossed seas. Polly hiding. Her agitated state compounded by kids letting off fire crackers under the covered walkway outside the studio.

The view to East Head from the western side of the lagoon dominated by the tunnel of the old railway at Featherbed. I pushed the composition lower on the canvas to give space for the East Head against the sky.

Paddles sorted, and with the sun out we headed down to the Yacht Club to try various surf-ski options. The lifting and carrying boats to and from the water didn’t leave much energy to paddle!

Something magical about a simple meal of green beans, corn on the cob and lamb chops on the braai. A DreamWorks moon over the lagoon. Owl chicks screaming for their mother to feed them.

First light, the waters of the lagoon buzzing with sports boats taking fishermen out to sea. Rails of fishing rods, with their multi-coloured line glinting in the sunlight.

Anniversary dinner at Die Gieter, one of the few serious food restaurants in Knysna. Perched high above the lagoon, the restaurant feels like being inside a conservatory. There is an art to simplicity, which when combined with passion and good ingredients, creates superb food. Particularly, French country cooking.

These aren’t small, delicate meals, artfully arranged on a plate, but massive portions full of flavour that demand serious attention. Scallops slow cooked in Chardonnay with cream and saffron. Hot whole Camembert in filo with honey, pecan nuts and honey. Duck fillet and entrecôte with fries were more than enough for four people. However, we left our plates clean!

We didn’t look at the wine list, as the generous corkage meant that we could enjoy our own Atarazia Pinot Noir, and Colmont bubbly. 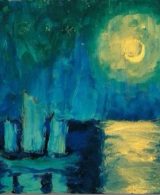 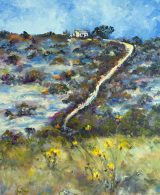