The Artist’s Garden at Saint-Clair

Henri Edmond Cross was born in Douai and grew up in Lille. His real name was in fact Henri-Edmond Delacroix, a heavy burden for a painter which is why he chose to anglicize it.

His early works, portraits and still lifes, were in the dark colors of realism, but after meeting with Claude Monet in 1883, he painted in the brighter colors of Impressionism. In 1884, Cross co-founded the Société des Artistes Indépendants with Georges Seurat. He went on to become one of the principal exponents of Neo-Impressionism.

In a break with Impressionism, the artists painted in their studios, embracing an intellectual, recomposed, methodical art in search of harmony rather than a strict replica of reality. This art was impregnated with scientific principles as Seurat sought inspiration in Chevreul, Ogden Rood or even Charles Blanc, while Signac wrote his treatise D’Eugène Delacroix au néo-impressionisme. Cross and Signac, insisting also on the importance of music in their paintings full of studied rhythms and sonorous colors.

Cross also observed the different moments in the day. The effect of light on colors, colder in the morning, warmer in the evening. There is the influence of Japanese fashion in a new, more decorative treatment of lines, in the ondulating smoke or the twisted tree trunks.

Matisse sought out Cross’ company : “his self-confidence crushes me and makes me look in my eyes as a poor man without will power, with no follow-through in my ideas and even without means (…). I regret being able to see Cross only very rarely” ; nevertheless, he painted a series of watercolors with him, colored annotations, without any traces of drawing, interpreting large spaces vibrant with light but with no line or perspective.

It was not until he moved to Saint-Clair, a small hamlet on the Côte d’Azur near Saint-Tropez, that he turned to pure landscape painting in oil and watercolor, using a vivid palette of saturated colors. On the Mediterranean coast, Cross relaxed the rigorous optical arrangements of the Neo-Impressionist technique in favor of a style of painting using long, blocky brushmarks in decorative, mosaic-like patterns.

His final years, plagued by rheumatism, were spent in Saint-Clair, where he died in 1910. 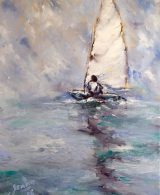 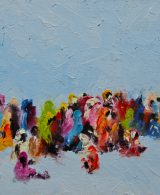