short walk in the forest at the Garden of Eden, before walking around the East Head rocks on a stunning morning.

Kirsten suggested that I look at the work of Elaine de Kooning. Particularly, her portrait work, which was opportune as I started work on a portrait of Sinni, one of the homeless guys we pass on our way for our morning cappuccino.

His hat, reminiscent of Van Gogh’s 1887 self portrait. However, it’s his piercing eyes that set him apart from his fellow homeless. William (not Prince William, he insists), Trompie, Chris and Tanya. All happy to have their photos taken.

I wanted to convey his transparentness. Part of our everyday lives. Yet not there at all. The hat, more attention grabbing than him as a person.

Sinni lives in a small boat and feeds his pigeons each morning. He was saved from drowning a couple of weeks ago, after falling into the lagoon while washing the adventure boats. A kindness shown to him by giving him a job, that could have had fatal consequences. Hands lacerated by the barnacles as he desperately tried to get onto the jetty.

Yet, still transparent. The homeless we don’t see.

“A portrait of myself, almost colourless, in ashen tones against a background of pale veronese green”
Van Gogh, letter to his brother Theo, dated September 16, 1888

‘Patterns’, an abstract work of the sea looking down from the cliffs of East Head. Done as a study for a larger canvas I have. Not sure I will be able to replicate it given that I have no idea what I was doing. Indian yellow, with Turquoise Blue, Phthalo Green and Cobalt Teal rubbed into each other. A spot of Transparent Gold Ochre and Primary Magenta for the patterns. As it was looking a tad bland, I used thick ridges of Phthalo Green and Cobalt Teal.

First paintings of the New Year sold from the studio. The sales have highlighted how poorly prepared I am for the parceling of sold paintings. I know that a dedicated wrapping station is advocated for a studio, however, my muddling through isn’t good enough. Correct sized protection sheets. Wrapping for air transport. Carry bags. Branding. I also need to get a news letter written and my email list sorted.

The air still. Holding its breath. Cowered by the heat. Gentle lapping of waves on the low tide, estuary beach. 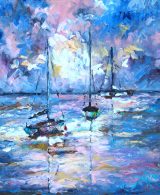 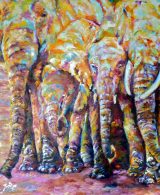