Painter, author, and amateur botanist expressed the visual power of flowers with these words in 1915. A leading light of the New York and new England art scenes during the late nineteenth and early twentieth centuries, Oakey Dewing painted landscapes, portraits, and figural works – many of which have not been located – but her artistic legacy is flower painting.

In 1875, at age 30, she participated in an exhibition at Cottier and Company, New York, an exhibition scholars argue cemented the formation of the Society of American Artists. As part of her training, Oakey traveled to Europe the following year and studied under Thomas Couture, returning abroad in the 1880s and ‘90s. By 1877 she was showing regularly at the National Academy of Design.

Oakey’s early work primarily focused on portraits and figure paintings, but in the 1880s she shifted her focus to still lifes. In October 1880, at age 35, she was introduced to American Impressionist Thomas Wilmer Dewing, whom she married six months later.

While traveling to Europe in 1885, Oakey Dewing encountered a cadre of young American artists who had established an art colony near Claude Monet and his famous garden. When the Dewings returned to the United States later that year, they went directly to Cornish, New Hampshire, where they would spend every summer for the next eighteen years.

With the arrival of sculptor Augustus Saint-Gaudens in early 1885 and the Dewings shortly afterwards, the small town became one of the earliest American art colonies. The Cornish community was sympathetic to creative endeavors and adhered to the “nature as sanctuary” ideology. Cornish was also known as a progressive art colony for women artists.

During that period in Cornish, Oakey Dewing became an avid gardener and perfected her flower painting. By the 1840s, garden culture had spread to America – gardening books were widely published, botany was a popular pursuit, and cultivated gardens entered mainstream fashion. The Dewing’s house had perhaps the first of the new-style gardens in Cornish, and by far the most extensive.

Iris at Dawn, 1899
With their elaborate and abundant gardens, they are often credited with having inspired the horticulture and gardening fashions that swept through the art colony in the 1890s. Oakey Dewing experimented with and cultivated plants she would later paint, most often depicting combinations of flowers that grew together in these carefully tended spaces.

Many artists of Oakey Dewing’s day strove to capture the soul of a flower by emphasizing its fleeting radiance and fragility. The transience of flowers made them at once appealing and challenging and roses were acknowledged as one of the most difficult flowers to paint.

“It seems almost impossible to render in paint all the characteristics which make up the beauty of our florists’ roses.” – author Mariana Griswold Van Rensselaer commenting about the 1893 National Academy of Design exhibition.

Oakey Dewing understood the demands of the genre, maintaining that flower painting required a “long apprenticeship in the garden.” She created her own approach: a middle ground between purely decorative flatness that resembled Japanese art and the illusion of depth found in Western art. Emphasizing a close-up view, she called her paintings “modern,” the term she used to differentiate outdoor paintings from studio still lifes.

Most of her works present a gardener’s-eye view into a thicket of transparent petals and leathery leaves that extend beyond the borders of the canvas, giving the viewer a sensation of being immersed among the flowers. Her technique is so close to perfection even in her staged vase paintings, and represents the peak of Gilded-age Decorative Style.

“Mrs. Dewing’s flowers have made for themselves a place apart in American painting. She gives us their character, their special texture, their special droop. [She] knew how to interpret the soul of a flower.” – contemporary critic Royal Cortissoz. 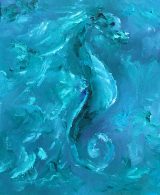 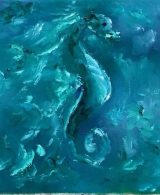