“I have painted the Seine throughout my life, at every hour, at every season. I have never tired of it: for me the Seine is always new.” —Claude Monet

Monet returned to France from London in 1872 and settled in Argenteuil (a town on a picturesque stretch of the Seine, eleven kilometres from central Paris), where he lived until 1876. His contemporaries Pierre-Auguste Renoir, Édouard Manet and Alfred Sisley joined him and, for a time, Argenteuil became a hub of artistic activity.

It was during this time that Monet created some of his most characteristic paintings. In order to observe the effects of sunlight on water more closely, Monet often worked from a boat-turned-studio.

Monet’s garden was always waiting for him when he returned to Argenteuil, weary from the noise and congestion of Paris. In The Artist’s Garden in Argenteuil, for example, done in 1873, the artist invites us into his private corner of paradise at its height, blooming freely in a spectrum of colors. You can almost pick the flowers with your imagination, actually feeling the texture of the artist’s brushstrokes.

But Argenteuil kept growing, invaded by chemical factories and iron works polluting its water and atmosphere. So Monet would be forced to leave in 1878 for the less developed Vetheuil which was farther from Paris. Argenteuil, Flowers by the Riverbank, one of Monet’s final works done in the town, is really an adieu, a farewell to what is often considered the zenith of the Impressionist movement. .

River of Light: Monet’s Impressions of the Seine by Douglas Skeggs, published by Gollancz, London, 1987. 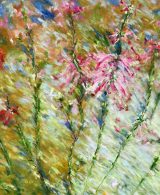 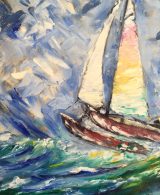