More than an artist, Perry was an advocate for the things that mattered to her most.

An American artist who worked in the Impressionist style, rendering portraits and landscapes in the free form manner of her mentor, Claude Monet.

Perry was an early advocate of the French Impressionist style and contributed to its reception in the United States. Perry’s early work was shaped by her exposure to the Boston school of artists and her travels in Europe and Japan. She was also greatly influenced by Ralph Waldo Emerson’s philosophies and her friendship with Camille Pissarro.

Lilla Cabot was born in Boston, Massachusetts. Her father was Dr. Samuel Cabot III, a distinguished surgeon. In 1874, she married Thomas Sergeant Perry, a Harvard alumnus scholar and linguist, and added his name.

In 1884 Perry began her formal artistic training with the portrait painter Alfred Quentin Collins. While Perry learned the more formal aspects of art-making with Collins, it was not until 1885 that she finally found an artist who truly inspired her personal style. In that year Perry worked with Robert Vonnoh, an artist who worked in the Impressionist’s plein-air style at Grez-Sur-Loing in France. Vonnoh’s work represented a distinct departure from the formal style Perry had been exposed to and it was this experience that planted the seeds for Perry’s lifelong dedication to Impressionism.

In 1888 Perry traveled to Munich where she studied with the German social realist Fritz von Uhde. Uhde’s handling of the subject and his use of color had a dynamic effect on Perry’s work. By the fall of 1888 Perry had returned to Paris where she enrolled in the Académie Julian and studied with Tony Robert-Fleury.

Between 1889 and 1909 Perry spent nine summers in Giverny. It was here that she fully found herself as an artist. During her time in Giverny she formed a close friendship with Claude Monet whose impressionistic handling of color and light greatly inspired her work. In addition, she also worked with a cadre of American artists who had found their way to Giverny including Theodore Robinson, John Breck, and Theodore Earl Butler.

There is a distinct shift observed in Perry’s work after she arrived in Giverny. Her La Petite Angèle, II (1888) illustrates the dramatic evolution her style during this period. Unlike her earlier portraits, like The Letter, which relied on more traditional techniques to carefully render the subject matter – La Petite Angèle, II is clearly impressionistic in style with its free form brushstrokes that capture the impression of light and color. Rather than blending together each brushstroke, Perry allowed the composition to be “raw”, thus allowing a vibrancy to be imbued in the canvas that was not possible in her earlier works. Giverny and more specifically Claude Monet, inspired Perry to work with plein-air forms, impressionistic brushstrokes, soft colors, and poppy red. In the window of La Petite Angèle, II we see the beginnings of what would become Perry’s love affair with the Impressionist’s handling of the landscape theme.

By the fall of 1889 Perry had departed from Giverny to tour Belgium and Holland and by November she had returned to Boston with her family. With her return to the states Perry did not leave behind the charms of Giverny that had provided her with so much inspiration. With her she brought back a painting by Monet in addition to a series of landscapes by John Breck. Collectively, these works would nourish her creative appetite until she could return to Giverny.

Perry’s artistic career took on new meaning when she returned to Boston. She was not content to simply paint in the new style she had acquired while overseas. More than this, she was inspired to “foster a new truth in painting” in the Boston art community that was not responsive to the new Impressionist modes.

To accomplish her goal of fostering this “new truth” in painting, Perry helped to organize the first public exhibition of Breck landscapes in November, 1890. To further her goal of helping the American audience understand the Impressionist’s style, Perry gave a lecture on Claude Monet on January 24, 1894 at the Boston Art Students Association.

In 1893 Perry’s career as an artist achieved a new level of success. It was during this year that Perry was chosen to represent Massachusetts at the World’s Columbian Exposition in Chicago, Illinois. Perry had seven works displayed at the exhibition, of which four of the compositions were worked in the plein-air style (Petite Angèle, I, An Open Air Concert, Reflections, Child in a Window) and three were more formal studio portraits (Portrait of a Child, Child with a Violoncello, Portrait Study of a Child).

For three years Perry resided in Japan that greatly influenced her work and made it possible for her to develop a unique style that brought together western and eastern aesthetic traditions. Her Meditation, Child in a Kimono and Young Girl with an Orange vibrantly illustrates the distinct changes that occurred in Perry’s work during her stay in Japan. Unlike her earlier works, both compositions draw on uniquely eastern subject matter and show a strong influence of the clean lines from Japanese prints. The result of this blending of east and west is striking with Impressionist portraits flowing seamlessly with the well-organized, balanced compositions that the eastern art world was known for at this time.

By 1923 Perry became critically ill with diphtheria. During this time she found new inspiration for her landscapes, what she referred to as “snowscapes.” These landscapes laden with snow became a passion for Perry who bundled herself up in blankets and hot water bottles in order to capture the beauty of a 4 a.m. sunrise. 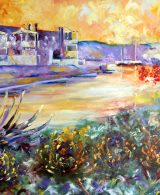