An American Impressionist painter known for his portraits and landscapes. He traveled extensively between the American East Coast and France, more specifically the artists colony Grez-sur-Loing.

Robert William Vonnoh has long been recognized as a pioneering figure in the development of American impressionism. The radical coloristic brilliance and dramatic impasto of some of his early paintings distinguished him among his contemporaries and in posterity as one of the most advanced first-generation American practitioners of impressionism.

Although he later claimed to have not seen Claude Monet’s work until 1889, Vonnoh visited the French impressionist exhibition at the Mechanics Building in Boston in 1883, as well as the impressionist collection the Durand-Ruel gallery displayed in New York three years later.

In 1887 Vonnoh returned to France for an extended stay that marked a turning point in his young career. Undertaking more daring experiments in pure color and broken brush strokes, as in the paintings of poppy fields that declared him “a devoted disciple of the new movement in painting.”

In Poppies the horizon is pressed close to the top edge of the image or eliminated altogether for an abstract effect heightened by the application of unmixed pigment seemingly directly from the tube. This work has been cited as evidence of Vonnoh’s awareness not only of Monet’s brilliant poppy field paintings but also of post-impressionism.

As an influential teacher at the Pennsylvania Academy of the Fine Arts in the 1890s he helped to nurture not only a taste for impressionism but individual self-expression, a value that proved fundamental in the advances of the next generation. Yet Vonnoh remains little known beyond scholarly circles, and that almost entirely for his radical impressionist work of the late 1880s and early 1890s.

Throughout his long career his production was notably bifurcated not only between landscape and figure and portrait painting but within each of those genres between a manner informed by impressionist color and light and a more academic, tonal approach.

When Vonnoh died in Nice, France, at the age of seventy-five, he was hailed as a versatile artist, although one best known for portraits “built up…solidly with regard to academic tradition.” 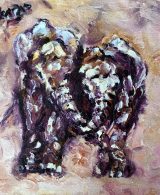