Preserved discreetly in a French private collection, Caillebotte’s Chemin montant was only known to historians from a checklist of works included in the seventh Impressionists’ show in Paris in 1882.

His fifteen-month stay was one of the most productive periods in his short, ten-year career as an artist.

From then to 1930, when the painting resurfaced in the collection of Jeanne Schultz in Paris, its whereabouts were unknown. Possibly it belonged to her mother, Doris Schultz (1856-1927), who frequented Parisian artistic circles in the 1880s. Until 1994 its sole recorded likeness was a caricature published by Draner in Le Charivari.

Chemin montant conveys an enticing freshness and luminosity, which is enhanced by its generous dimensions.

The rediscovery of this important painting raises similar questions to those posed by the critics in 1882: Where was the composition painted? Who are the figures and what is their relationship? Why does the use of a relatively flat perspective contradict the very title of the painting (rising road)?

Caillebotte did not identify the location of this country scene, although the brilliant white and pink villa glimpsed on the left suggested a Norman seaside resort, likely the hills of Trouville or Villers-sur-mer, where Caillebotte spent many weeks each summer participating in local regattas.

Further evidence of the location was supported by Villas au bord de la mer, en Normandie, painted in the same year, in which the architecture of the house, its outer wall and gate convincingly match those of Chemin montant.

These architectural details led to the recent discovery of the villa itself—at the end of a steep private path on the hills of Trouville. Amazingly, the villa, the path, its surrounding houses and the vegetation have remained unchanged to this day.

As was customary for the Impressionists, Caillebotte modified the perspective of Chemin montant to suit his own artistic agenda.

In order to integrate the figures into the landscape for a seamless composition he flattened the road, which is correctly seen to be rising in Villas au bord de la mer, en Normandie, and generously filled the frame with lush vegetation. The two figures seem to be wealthy city dwellers, for whom the summer sojourn in Normandy became an obligatory ritual.

When depicting bourgeois figures at leisure, Caillebotte often presented them from the back, anonymously, with little or no interaction among themselves.

The scholar and curator, Anne Distel, suggests a more intimate reading of this picture: ‘The man in boating attire, shown from the back, haven’t we previously seen him in Caillebotte’s painting of the Park at Yerres? Might he be the artist himself, here pretending to smoke a pipe? And might not this young woman with a parasol be Charlotte Berthier, the artist’s companion until his death?’

Although Caillebotte painted more than fifty landscapes during his summers in Normandy (only a handful include figures), Chemin montantwas the only painting of this period he chose to exhibit during his lifetime, a testimony to its importance.

As was the case with L’Homme au balcon and L’Étalage, the present work was most probably gifted by the artist shortly after the 1882 Impressionist exhibition, although no surviving document to this effect confirms this. Like the identity of the couple in Chemin montant, the early provenance of the painting remains romantically mysterious. 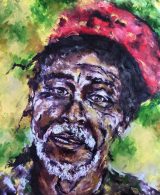 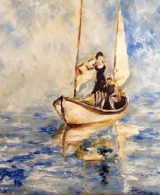