Adrenalin infuses each breath of Knysna as the Oyster Festival kick starts. Overboard for 29 hours, and surviving (a talk by Brett Archibald), seemed to make our 2 hour cycle insignificant. Although my sensitive bum might not agree!

Somewhere between, storms and sunshine. Pizza. Red wine and laughter. Glowing fires and freezing hands. Worlds collide. This one. Gentle.

Lights in the studio changed to LED tubes that have a better colour temperature than the old fluorescent tubes. Significantly lowering our electricity usage, increasing sustainability by not having to dispose of gaseous tubes and improving light quality. Minor security upgrades installed that will hopefully deter passing vagrants while not annoying people coming into the studio.

Full studio for the Artist Tuesday movie. Herb and Dorothy challenging notions of what art is, and highlighting how much of the development process (which formed a large part of their collection) of the final art piece, is being lost in this digital age.

My morning as a ‘Waste Warrior’. Artful Waste Challenge to bring awareness of the junk being washed into the estuary as part of the Oyster Festival done in a howling gale. Fortunately the rain stayed swayed for the window we were out walking collecting junk. The pile, and nature of which, was astonishing. The artworks, despite the wind were original and spectacular.

A couple of small paintings sold, with a bunch of traffic through the studio as Oyster Festival reaches its peak. Envious of the runners that seem to be everywhere as the town fills for the Forest Marathon. 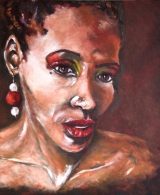 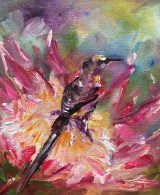