After a couple of gentle cycles, I headed out on Hirsh’s route. Simola as a starter with the Gouna Pass as desert and a nasty climb towards Kom se Pad in between. Exhausting. A tad much for my fitness levels. Made enjoyable by the beautiful forest after the rain. That the last bit is downhill certainly helps.

Ashton, outside the Route 62 Station where we stopped to peruse the Robertson wine selection (Balthazar Wild Yeast Chardonnay bubbles – outstanding, Du Von old vine Chenin – excellent value, and Lord’s Pinot Noir). Our car-gaurd, John Terblanche, unflinching in the searing temperatures, toughened in the diamond soils of Kimberly. He was happy to pose for his portrait, which I hope to have on the easel soon.
Early walk in the mountains behind Montagu. The cloud cover keeping the heat from broiling us as we made our way along the contour path to Piet se Pad. Fires have destroyed much of the vegetation, which also cleared the views across the valley.

Schoone Oordt Country House with a cup of tea after an earlyish swim. It’s one of those grand old Georgian houses that has an annex of new rooms that are carefully designed and cater for every comfort. The white everything a tad uncomfortable for my ability to get blood and red wine on things! The duo of lamb, scruptious.
Ile de Pain has braai wood bundles with proportions of different wood types for that perfect braai fire. The fire roared, which brought the security guards running thinking I was burning down the apartment. However, it settled down into red coals that not only did our fillet but could have been used for a dozen braai’s. 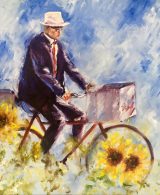 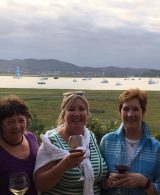