The combination of an oxygen high at first light dashing through the forest, combined with the smell of freshly cut pine and red wine still pumping through your veins must be close to the ‘Exilir of Life.’

On a perfect evening the ‘Open Studio’ brought a bunch of new people to the studio, with lively discussion on technique, subject matter, material and the dichotomy of creating and selling art. We made a great deal of noise far into the night.
The studio has been a tad hectic, with paintings needing to be wrapped, shippers organised, invoices sorted amongst the seemingly endless flow of wine. With a bunch of the small paintings having been sold, I’m painting a new series of elephants from the Knysna Elephant Park, as well as Knysna sea-horses. In addition, I’m getting my head around the portrait of the Guitar Man. Cool colours of Cobalt Teal, Rose Madder Carmine and Cerulean Blue for the background, with the warmer Ultramarine Blue and Burnt Sienna as a dark brown for the eyes.
A bunch of Chinese in the studio looking for artists for an art exhibition that is being planned for China later in the year. With the increase in Chinese tourists and their culture of bargaining everything to death, they have been difficult to deal with. Hence, anything I can learn about such a different market will be useful.
I’ve also been sloppy about keeping an email list updated and active, which was a problem for the Open Day, as there have been a number of people who have purchased my work who did not know about it.
Somehow the evening of Wine Tasting resulted in a fair bit of blood during the short night, getting to bed a touch before midnight with the rain teaming down. Woke a bit before the alarm and decided I didn’t want to brave the mud up Phantom. It was tempting as I have a pair of flat-pedals and ‘five-ten’ shoes to try. I put the pedals on the bicycle and whizzed about a bit. They look impressive and are a big improvement on the ones I had. Haven’t tried the shoes yet. My jog was enjoyable, with only a few squeaks from my Achilles. 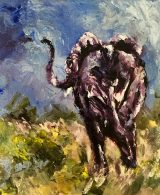 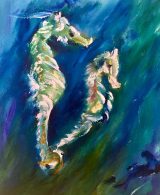