Golden sunsets. A chill to the air. Heralding a hint of summers end. The wind, exhausted by summer. Content to rest early. Red wine and pizza. The fire stirring.

But for now, it has a bird trapped behind the glass. Yelling it’s indigence when the door is opened and it flits to freedom. Perhaps a nest in the chimney, not the best idea?
The climb out of from the river crossing over the Gouna Pass, testing strength and bike handling skills, with the surface loose and the gradient, that touch, beyond steep. Fortunately, the reverse climb from the river up to Simola, through the indigenous forest, was spectacular.
My new DMR flat pedals have been delivered. The anodized blue lugs not quite in keeping with the red of the super-fast hardtail that I ride. Menacing, the large surface area means that if you do let your feet bounce from the pedals, they connect your shin on the next revolution.
Portrait of the ‘GuitarMan’, dark and somber. The lightness of the Sunshine Coast not, at this point, coming through the painting.

I used a ‘scratching’ technique for the beard of the portrait. My fingernails tearing chunks out of the paint layers. An abstract interpretation for the guitar neck so as not to distract from the portrait.
There is a whisper of moon in the evening sky. An early evening after a fabulous rack-of-lamb braai, and a great Shiraz from Graceland. The smooth spicy flavours waving their magic through the smoky lamb.
For the lamb, after the fire in the Weber was ready, I put the lid on and heated the Weber for 15 minutes before putting in the rack. 5 minutes on direct heat with the bones down, before turning them onto their fat edges over the coals for a further ten minutes. Another five to ten minutes on the bones (depending on how pink you want the meat) and they were ready.

My muscles slowly stiffening after a tumble on my jog. Tripped while heading out and not paying attention to where I was putting my feet. Skinned my knee and trashed my phone, which was in my hand. In mitigation, the morning was cool and my ankles were stiff at the start of my jog. Not much of an excuse, I know. Fortunately nothing broken. Other than my phone!
Knysna Seahorse Series 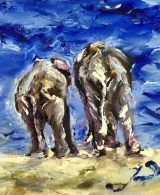 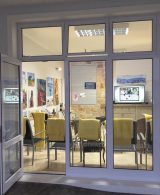