That ‘broken wing’ effect with the strain on my elbow from painting the large canvas, ‘Colourful Story of Leaves’, which is finished. Fortunately the client who expressed interest in the painting has decided to take it.

I haven’t been hugely successful at carrying out commissions, however this past year I have engaged much more proactively with the client during the painting process. After getting agreement on the initial concept, I have sent them regular updates of the painting process, explaining what I’m trying to achieve. Hopefully this keeps them engaged in the process and ensures that the final painting exceeds their expectations and feels like the unique, custom painted picture that it is.

I also received confirmation that DHL are happy to bring my paint across from France. A whole ton of procedural stuff that only emphasizes why Amazon are doing so well. Push the button, and the goods arrive!

Gentle cycle up Phantom Pass, after yet another puncture. Again, fortunately at the start of the ride, which meant attentive help at Bespoke Cycles.

Multi-coloured birthday cake, required that extra bottle of wine. Phillip brought out the amazing Driehoek Shiraz which was voted as the best Shiraz in the world. With our impromptu dinner, a 2010 Moulin-a-Vent Grande Cuvée. And that extra bit of cake. I didn’t drive home!

Only a bit of blood assisting to put up an Owl Box outside the studio.

Mo and Rose, Robertson, looking out across the cacti garden to the mountains under clear blue skies. A glass of wine, bird calls and the sounds of industrious gardeners. A tad nostalgic, as my first ever job (13 years old) was working in a specialist cactus and succulent nursery. Walking past some of the specimens, I can still remember their names.

Our lives changed with a seven month old Border Collie cross, rescue dog, a new addition. We collected him in Cape Town and he slept most of the way back to Knysna. So different to Polly who paced the back seat the whole time.

Prince (the name he came with) was abandoned on the side of the road at birth and after being taken in at the SPCA and a couple of foster homes, where he was given behavioral training. Hence, while we have a young, strong energy fiend, we don’t have a monster.

He is scared of the dark, and everything that makes a noise, or casts a shadow. The scary clock and the two wooden guinea-fowl at the top of the stairs are top of his ‘fear list’, with the popping of the heater close-behind. Being a ‘suburbia’ dog, the sounds of the street outside the studio with people, cars, and birds are all a bit frightening.

He managed his first evening out with a bunch of people at Coreta’s house without any problem, and seemed happy enough running around the dog-run with the other dogs. Diva has sort of accepted him and there is a hint that they could become great friends.

A ton of early morning and late night walks ahead, with longer runs in our future. 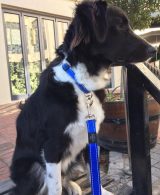