My times around our various cycle and running routes have been getting slower, with the ride up to the Brenton view point a slow struggle (I was a distant last). Following a series of punctures, I have been concerned about binding of the back disc brake, which would account for some of the slowness, however, this wouldn’t account for the pedestrian running.
A tad more concerning is that I haven’t been able to drink wine, as every bottle tastes corked. That damp, sweaty, cardboard taste. That, with no real appeal for food (croissants with cheese and ham don’t count. Neither do ice-creams or chocolate milkshakes), I have become seriously boring.
With radical weight loss, increased fatigue, and drinking huge amounts of water, it was time to visit the doctor. Diabetes the diagnosis with the need to radically cut down on all sugars to bring the levels down to normal.
The meds have kicked in with shakes, cold extremities, nausea, shortness of breath, and headaches as my body comes off its sugar high. Afghan socks marvelous at keeping my feet from freezing and a tea mug keeping my hands warm.

Didn’t expect to end up in hospital as they try and sort a few complications and introduce insulin under observation. The injections less intrusive than expected, especially for someone who doesn’t like needles.
Not sure why people need to have their various beeps, whistles, tones and speaker calls of their cell-phones playing while they sit in a hospital bed. Fortunately, in a hospital ward there are all sorts of tubes, sharp instruments, drugs and plastic bags to conjure up a myriad of deaths.
Day 3 of having a Border Collie rescue pup in our lives, started at around 1am, when he decided it was play time.
Not having any idea of his bathroom habits, as he hasn’t lived in an apartment before, with no garden access for those routine toilet breaks, we are highly sensitive to his getting up and strolling around. We have learnt that being scared of the dark, taking him out in the dark hours for a toilet break doesn’t work.
We also know that if he gets bored, then he tends to decimate the nearest fun object. Somehow I managed to scratch my arm and bleed excessively over the clean linen, which he found fascinating. His only distraction a raw-hide chew type thing that he could chase like a hockey puck across the wooden floor, in between bouts of tearing it apart. All quiet noisy!
After his cappuccino walk at first light, and that all important toilet stop, we were a tad surprised to find the apartment relatively clean and in one piece. Sunny, if chilly day. Bath time to sort any ticks and fleas.
As he has managed to decimate the three soft ‘puppy’ toys, the search was for something that would keep him occupied, wouldn’t bounce excessively, or have any toxic bits (plastic) that he could swallow. Keeping him occupied is a relative term as in reality you are the interactive play-mate. 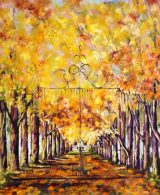 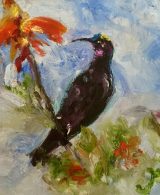