Paintings in their new home in Provence

Prince had a wonderful time at J9 charging about looking for buried treasures that Diva had left about the place. Especially those hidden in dark spots under the deck and walkways. Spring high adding a water dimension to the hunt.

Coreta made Tartiflette au reblochon, with cauliflower rather than potatoes. The cheese mature enough that it walked. With steak cooked perfectly on the braai, pure hedonism. Craig opened a bottle of 2009 Radford Dale Gravity that was sensational.

Early morning busy with cars ferrying cyclists off to the start of the Seven Passes ride. It meant that my quiet cappuccino was actually chaotic. Fortunately the good humoured excitement was tolerant of a puppy that was under everyone’s feet.

Painted rocks for the ‘Knysna Rocks’ fun Facebook campaign, based on a Tazzie campaign to inject happiness into days which seems filled with bad news. I picked up my rocks from the beach at East Head after our walk and painted across six rocks, where when assembled it makes one painting, but each one is also an individual painting. Coral trees and Bougainville creating brilliant colored carpets of fallen blossoms, my inspiration merged in a zen-like simplicity.

Between the mountains and the sea, a ribbon of yellow and green, the spectacular drive to Cape Town.

‘A Touch of Yellow’ 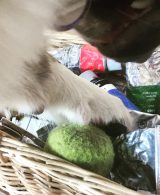 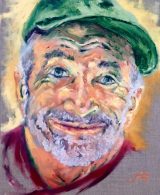