It’s a wonder that Jan and I travel so well together. I love street food while he is is cautious, suspicious and resistant – until we can find a restaurant that has adult size chairs and tables and recognizable food, even if it’s served in a bowl of soup.

For two consecutive mornings we have gone out for breakfast of Pho Ga – a bowl of noodle soup with chicken. There is also a beef option. Fragrant with lime leaves, fresh coriander, mint and spring onions, this clear chicken broth is typical of the one-dish street food available, lest it be said, on the street.

On the whole, we don’t eat the noodles (too carb rich), but the Pho is nutritious and filling. The protein content is nominal though – less than half a chicken breast between the two of us. No wonder these people are so slim! Extras can be ordered and added to the soup – such as a poached egg yolk, which is poached in a soup ladle lowered into the huge pot of broth simmering on the edge of the pavement. There are other delicacies such as egg embryos that can also be poached and added to your bowl of Pho. And as adventurous as I am, I haven’t braved the extras. Visually, they aren’t attractive (to me). A squeeze of fresh lime juice over the Pho is the only condiment we add, although there is garlic, fresh chili, fish sauce, and commercial sweet-chili sauce on the tray on the table.

Birds in their bamboo cages sing and chirp in the eaves above us, and business men, breakfasting women, children and families and waiting-staff all chatter around us, a background noise to the traffic at our elbows.

We’ve learned the art of holding our spoons in our left hands and negotiating food (including the slippery and elusive noodles) onto the spoon using our chopsticks, then popping the spoonful into our mouths. Although etiquette allows us to lift the bowls to our chins so that we don’t mess, it is not considered polite to sip the soup directly from the bowl. The very small tissue-serviettes are inadequate for our eating skills.

My street food tour was a taste sensation – from the Pho we went into the old quarter to enjoy the rolled rice pancake – Banh Cuon. Made from rice batter, a thin thin layer is spread across a fine cloth stretched drum-tight over a steaming pot of water. This ‘pancake’ cooks ultra quickly, is lifted off with a pair of chopsticks, and rolled up with either a filling of minced pork and mushroom, or whole eggs steamed on the drum and rolled into the pancake. Served with fresh coriander or garnished with crisp deep-fried shallots and shrimp, and a dipping sauce – this breakfast is also fragrant, fresh, light – but filling. The dipping sauce is a broth flavored with fish sauce.

The French introduced baguettes to Vietnam (plus their pasties and cakes). The Vietnamese version of the baguette is more like a large bread roll, made with a mixture of wheat and rice flour. Various pavement vendors sell rolls -banh – filled with salads, and various options of omelette, chicken, and BBQ pork. I declined sampling this as I’d already eaten too much breakfast and there were still two more stops on the tour of food tasting !!!

I’d been dying to try the street BBQ – the aroma of grilled pork from almost every street corner seems impossible to resist, a bit like the smell of boerewors braaing at a market or sports field event. Mouthwatering. And despite all our pavement beers and the BBQ happening two paving stones away, Jan still wasn’t convinced.

But I had my way. My guide Y took me to a pavement BBQ stop, innocuous between two scooter repair shops near the stone gates into the old city. Caught between a major highway and an ancient wall, we sat on tiny plastic stools, and ate pork patties in betel leaves, grilled over a tiny charcoal brazier balanced in the gutter. An old woman under her conical hat cooked the meat, her son served us the BBQ pieces in a bowl of broth, with rice noodles on the side and a bowl of fresh salad to share. Tender, moist, smoky and a slight sweetness from the broth. And his son, a student of ‘banking’, served us ice water and practiced his English. This family (the mother in the back ground preparing the food), another son working on the scooters next door, live in a space smaller than a single garage that opens onto the pavement: they operate their food business on the street.

The people of Hanoi (or Vietnam), live on the streets – mostly their homes are too small, so they move their kettles and braziers onto the streets. They play cards and catch up on the pavements, and even if they aren’t selling their food, they still eat it on the streets. Apparently, eating alone is painful, so being on the streets, or sharing a table at a street food outlet, is preferable to eating alone. Even we have found sipping our coffee – ca phe – or drinking our ‘fresh beer’ – bia hoi – companionable, our tables pushed up close to our Vietnamese neighbors. We nod and smile a lot.

My morning ended with a really decadent egg coffee! The egg , whipped to a frenzy rather like the Italian zablione, is served over a cup of espresso! The sugar content scary, the coffee was to die for!

In Jan’s defense, he has succumbed to a BBQ outlet at the market, where the turnover is quick and the pork patties freshly grilled. We bring them back to our apartment and eat them with fresh tomatoes, relaxed in comfortable chairs with the street noise five floors below us. 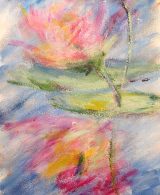 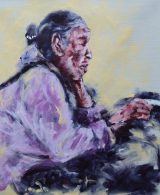