‘Lone Traveler’, a woman traveling alone through Hoi An, Vietnam. The safety of a corner in a coffee shop. Light playing across her contemplative emotions. Searching for that perfect line. Inspiration from the stunning Japanese painting ‘four seasons’, copies of which were in one of the galleries.

Fortunately, the painting doesn’t reflect the gazillion changes to the composition, or the battle waged during the paintings progress. Paint under my fingernails (no gloves needed with acrylics), the only indication of its intensity.

(A note from me, Terry). I’ve often watched Jan paint in his studio, but its only for a minute or two while we chat about domestic logistics. Being in the hotel room with him while we were hemmed in with the typhoon is an an entirely different experience. The energy in the air changed so much I couldn’t focus on my reading. The concentration, intensity and finer-dashing was exhausting viewing. I held my breath for minutes until he changed colour or finger before dabbing madly again. With different colours on his different fingers his hands moved like old fashioned typists who knew the qwerty keyboard blindfolded. How does he remember which colour is on which finger? It was mesmerising. And when he comes up for air, his eyes refocus to reorientate to a world with a wife in it. Where does he go?

The entertaining aspect is how he settles down or disentangles himself from a wet canvas, a palette with colours escaped from their indentations – to the sides, underneath, his knees, fingers, floor, chair, wrist and occasionally his clothes. The dance to get everything wiped clean is as frenetic as the painting itself. And then we both deserve a beer, and I can breathe again.

Scooter crazy traffic is expected. What has been surprising are the number of electric scooters around the place. School kids using them as commuter vehicles as they doe t need licenses, but even amongst the regular petrol driven engines, there are a heap of electric scooters. Quick and silent, and for a pedestrian, quite unnerving. Their high-powered LED lights the only indication of their approach.

Sun out, with a sprinkling of rain. Humidity turning our damp clothing, after days of rain, soggy. As the streets are cleaned following the receding water levels, the shops open and we can access new parts of the town. Mia coffee for that last iced-americano before we head out to the airport and the adventure moves to Saigon. 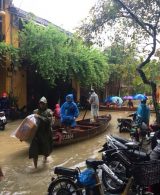 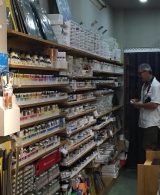