Rolling the pork belly, with pesto and a butterflied pork fillet to prepare the Porchetta is a messy business. I managed to make an ever bigger mess of the Weber fire, which meant only half of it was ready. Not nearly hot enough to cook the thick roll of pork. It did do a bit of the skin crisping before the oven came to the rescue. A bunch of wine while we waited the extra hour for it to cook.

Forgot the anti-chafing cream. That extra, last, glass of wine, probably didn’t help. Neither did the, failed, rescue attempt of the storm trapped bird in the midnight hours.

Discussing composition, tone and the use of technology to untangle the frustration when a painting isn’t working. Art teacher looking for inspiration and assistance for his art class heading into a new semester.

Spectacular sunrise. Skirting the magical forest at Bibby’s Hoek. Tearing down sharp descents, powering up the steep inclines. Or at least until my legs faded. Body bounced into jelly.

‘Blue House’, an acrylic and marker pen illustration on paper of one of the houses in old town Hoi-An, Vietnam. The blue startling amongst the yellow which dominates the town.

‘Monochromatic’ exhibition at the old jail complex gallery. A couple of amazing works amongst the conservative. My painting ‘Boudoir Study 2’, fabulously positioned.

Like many traditional Italian foods, porchetta is prepared differently from region to region but is generally defined as a dish of boneless roast pork stuffed with filling and then rolled and roasted, usually over wood. In the town of Ariccia in the Lazio region of Italy, porchetta restaurants abound, leading to a close association with the dish, though variations of it are made across the country.

Add, a twist with the melting pork belly and blue cheese combination invented by Iain Graham of Urban Caprice to go with Mumm champagne.

Place the pork loin skin-side down. On the tapered side of the loin, make a cut about 1-inch deep and then cut straight across to butterfly, continuing to make 1-inch cuts until the loin folds open like a book. Set aside.

| Preparation – Pork Roast | Season skin side of prepared pork belly with salt. Turn belly skin-side down and place flat on a cutting board with the short end facing you. Season with pepper and more salt.

Spread half of the pesto over the belly, leaving a 1-inch border around the sides.

Lay butterflied pork loin in the center of the pork belly and spread remaining pesto over loin. Arrange garlic and sage on top of loin. Season with salt and pepper.

To roll the roast, begin at the end of the pork loin where you finished the initial cut, slowly rolling and packing ingredients in tightly. When finished rolling the roast, use butcher’s twine to tie roast at 1-inch increments so it will cook evenly. Set roast on a platter and refrigerate overnight.

| To Cook | Remove roast from refrigerator 2 hours before cooking.

To estimate the cooking time, measure the roast through its thickest part, and cook for 1minute per millimeter. Hence if it’s 90mm thick, cook for 90 minutes.

An indirect fire (two equal piles of coal on either side of the charcoal grate, with a drip pan in the middle to catch the rendering fat), topped with a couple of pieces of hard wood.

Place roast on the grill, turning every 10 minutes until the skin is browned and crisp.

Reduce the temperature (325ºF) by closing the vents halfway and leave until the loin reaches 140 degrees. (1½ to 2½ hours)

Remove and allow to rest for 20 minutes before serving.

Just before serving, top with a sliver of blue cheese and a tiny button of redcurrant jelly. 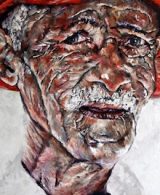 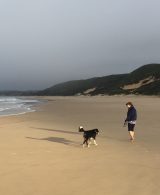