A small study of the adventures that lie beyond the wall at Kuilfontein Farm in the Karoo.

Afternoon sunshine, a civilised time to be out cycling through the Forest. Particularly civilised as after the ride, it’s possible to stop for a beer. Or rather a glass of white wine. Actually, a glass of chilled red wine. What was I thinking?

One of those silly things, not concentrating while out food shopping. A special. Seemed like a good idea. Dinner. Blood sugars sky high. The contents of the sausage an unknown. Despite being from our favourite butcher, no idea what he used.

If there isn’t a nutritional information breakdown, I should know not to buy.

Border Collies turning the apartment upside down. Prince, with his leg in a plaster to sort out a ‘hot-spot’, thrilled to have his friend Ricco visiting.

A touch of rain. Puddles to stomp through.

Looking at where we need to sort gaps in the Vietnam recipe book, I have gone back, and reread parts of Colour: Travels through a Paintbox by Victoria Finlay, intriguing stories on the pigments in Artists colours.

The yellow of Hoi An Old Town, is revered in the culture of Vietnam. It is a symbol of luck, splendor, wealth and respect. A color that is identified with imagination and enlightenment, glowing with the intensity of sunlight itself. Most Vietnamese families have an ancestral altar decorated with flowers and yellow objects.

In all likelihood, the yellow pigment has its origins in Gamboge yellow, also known as Rattan or Wisteria Yellow, Gummi Gutta and Drop Gum, is an organic pigment. Well know for its transparency, the warm golden pigment derives its name from its country of origin: Cambodia, itself named after the Latin word for pigment gambogium.

Made from the resin of the Garcinia evergreen tree, found across South East Asia, trees need to be at least 10 years old before the trunks can be lacerated or the branches broken to collect the tree’s milky yellow resin. The poisonous resin is collected in empty bamboo shoots, and roasted over fire to evaporate moisture, after which the bamboo shoots are broken to reveal dull yellow resin cylinders. Only when this resin is pulverised does it become a brilliant yellow.

Excerpts on Yellow from Colour: Travels through the Paintbox:

Dipping a paintbrush in water and waved it lightly over the unappetizingly brownish rock, he released a miraculous drop of the brightest yellow imaginable, almost fluorescent.

During the horrific Khmer Rouge regime in the 1980s, and then earlier in the Vietnam War, the color was almost impossible to find. This pretty paint can be dangerous in other ways. Winsor & Newton have been receiving small parcels of gamboge from their Southeast Asian suppliers since before anyone can remember, and probably since the company started in the mid-nineteenth century. When it arrives at the factory they grind it up carefully and sell it in tubes or pans as one of their more expensive watercolors. But some of the packages that arrived in the 1970s and 1980s from Cambodia and possibly Vietnam were different: the gamboge contained exploded bullets. The company’s technical director, Ian Garrett has five of them displayed in his office now. A reminder that some of the colours that are taken for granted, come from places where people have lived through unimaginable suffering. 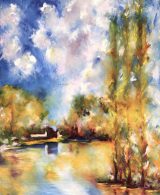 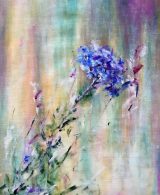