A surreal world beneath the mountain. Immaculate and cared for.

‘Linda’s Breasts’, not on the menu. Definitely worth asking for at Via’s. A hint of warmth in the spices used on the chicken breast, transformative. While the chips looked impossibly tempting, there was nothing wrong with my roast veggies. Except, they were veggies! The aromas from the coffee roaster, intoxicating.

I did a morning painting demonstration. A floral painting of a lily, orchid sort of flower in my Mums garden. White flowers adding that touch of mystery as to the approach. The painting was influenced by the ‘Wearable Art’ range of silk scarves I’m focusing on, which influenced the colours. The influence of Van Gogh’s almond blossoms in the turquoise background.

“My work was going well,” he informed his brother, “the last canvas of branches in blossom – you will see that it is perhaps the best, the most patiently worked thing I had done, painted with calm and with greater firmness of touch. And the next day, down like a brute.”

Interesting to have artists painting their own pictures during the demonstration. I did get tied down a tad by the delicate fingers of the flowers.

Prince still struggling with the effects of ‘salt poisoning’ from our play on the beach, chasing stones into the surf and ingesting too much salt water. Will need to carry grease water to hydrate him and keep his playing along the sand, rather than in the water. 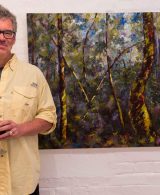