‘Surfers’, my painting of dolphin taken from a photo out along Brenton beach. Movement to capture their joyful play the essence of the painting on a large canvas (2mx0,7m) that allowed me to indulge in the different colours of the sea.

I used the high translucency of phthalo blue and green as the primary colours in the water, adding lemon yellow to get a turquoise tint that was still transparent. Smudges of permanent magenta and cobalt blue gave a grayish tinge for to assist in the contrast of the sea spray.

The Forager in Scarborough our lunch stop after struggling to find shade parking for Prince and wanting to be out of the weekend afternoon traffic chaos that Cape Town ties itself up in. Pleasantly surprised that it was dog friendly. A Rosé from Steenberg, with a fillet wrap of some description. A tad dissapointing that the coconut wrap described on the menu is no longer available, which meant most of the meal had to be discarded.

Surrounded by a group of cyclists on the last stage of their Cape tour. All done on ebikes! We noticed that a couple of them were wearing nifty mirrors on their glasses to keep track of what was happening behind them. When I queried as to where they are available, the guy unclipped it and handed it to me. Amazing.

Beach walk in the sunshine. Prince still terribly afraid of the crashing surf. Border Collie mayhem once he was coaxed onto the beach, into a world of dog craziness. Watching the flow of the sea and surfers for my painting of the dolphins.

Live Bait at Muizenberg, simply fabulous. Distracted by the changing light on the sea. Gentle flavours from the ‘92 Boschendal Lanoy from somewhere in Alan’s stash, with the yellowtail, which was grilled to perfection. A quick trip through the village that continues its transformation from the rundown, shambolic, to quirky, interesting.

Blue tape making a reappearance on my leg as I seem to have strained my Achilles at some point. Nothing crazy in my daily running or cycling. Still, a nuisance. 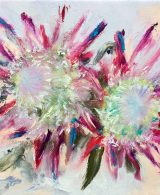 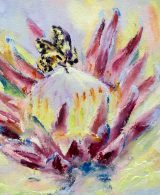