Seven Passes road to Wilderness makes for a fabulous 75km morning ride. Twisting down through the gorges, the light filtered through the indigenous Forest. Didn’t see any elephants, although that could have been due to the sweat staining my glasses. Legs finished. Bum, complaining.

Flava restaurant the meeting point for the support crew that assembled the bits of cyclists, gear and bicycles for the trip home. Despite being confronted by a hord of hungry, dirty cyclists, our food was amazing, and the cappuccino perfect.

Quick trip to see Lesa and Mark in Kommetjie.

Harbour House at the Waterfront. The menu, for a diabetic, a list of impossible, delicious sounding food. Settled on the starters as they had the most manageable, but still exotic, options. The Seafood Stack with salmon tartare, crushed avo, tomato bits, prawn tempura and caviar with pea shoots tasted as amazing as it looked. Spicy grilled calamari with olives, lemon and capers a tad less exciting.

Walk out to the wreck of the Kakopo, which ran aground on Long Beach in May 1900 en route from New Zealand to Cape Town. It mistook Chapman’s Peak for Cape Point in poor visibility. Lots of warning signs about muggings. The beach, stunning.

The pizza quest that is tasty, diabetic friendly and can be done in the Kamado Jan. A tad more challenging than the holy-grail. A galette recipe the inspiration for a trial dinner. Tasty. The fire too hot. Cooked too long. Still, much better than any commercial alternative we have experienced. Definitely, to be repeated!

Just in time for Christmas, the new silk scarves arrived. Orders couriered to their new homes and the studio display, luxuriantly decadent.

Have you ever made pizza dough out of mozzarella cheese? Made famous by the people behind the Fathead movie, it really is quite revolutionary. Try your hand at my magic mozzarella dough and make this spinach mushroom galette. You won’t regret it!

2. Line a baking sheet with parchment paper or a silicone liner. Lightly grease the liner.

3. In a large saucepan, melt the cheese and butter together over low heat until they are melted and can be stirred together. Remove from heat and add almond flour, coconut flour, baking powder, garlic powder and salt.

4. Add the egg and stir everything together until a cohesive dough forms. Use a rubber spatula to really knead it up against the sides of the pan. It may still contain some streaks of cheese.

5. Transfer to the prepared pan and knead a few more times until uniform. If your dough is very sticky, work in another tablespoon or two of almond flour. Cover the dough with another piece of parchment and roll out to a 12-inch (30 cm) circle.

1. Spread the dough with the softened cream cheese, leaving a 2-inch (5 cm) border around the outside. Sprinkle with the garlic and salt and pepper.

2. Squeeze as much moisture as possible from the spinach and layer over the cream cheese, then add a layer of mushrooms. Sprinkle with the grated cheeses.

3. Fold the edges of the crust over the filling and brush with the beaten egg yolk. Bake the galette for 25 to 30 minutes, until the crust is golden brown and the cheese is melted.

Because the cheese creates a flexible dough that stretches like pizza dough, it’s useful for so many other things. Consider it for stromboli, calzones, and even sweet pastries. It can be rolled out thinly and used for crackers or even pie crusts.

I modified the basic Fathead dough, which is just simply grated cheese, cream cheese, almond flour, and an egg, to be a little sturdier. A combination of almond flour and coconut flour means it holds up better and doesn’t spread as much during baking. A little baking powder gives it a bit more of a rise, and some garlic powder gives it a great savory flavor.

A galette is tart or a pie that isn’t baked in a pan, but formed by hand with the crust folded partway over the fillings. Fathead dough makes a perfect galette crust because of its flexibility. This savory galette is filled with mushrooms, spinach, and cheese and makes a nice alternative to meat based keto recipes. It can be the whole meal or served as a side dish or appetizer. It 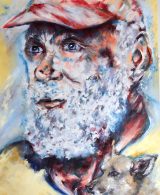