The latest painting in my ‘Humanising the Homeless’ series of portraits. Peter and his constant companion, ‘come-along’. He is rough sleeping street dog, so I used the crumpled finger ends of the gloves to produce a rough texture for his fur. His eyes, full of his ‘Yoda’ like wisdom. The magical Monaco Madder colour adding depth and richness to the painting.

Amazing that strangers are stopping Peter in the street to ask him if he is the man in the portrait bring painted by the ‘finger-painter’!

Terry’s Terrine de campagne and an impromptu dinner with friends. Scrupdellicious. A memorable evening. Fortunately, that one extra glass of red wine, rye bread with the terrine, followed by bûche de Noël didn’t blow my blood sugar out of the water.

Beach play with Prince and Rico. The pure joy of summer madness.

Slow jog to test my bothersome Achilles. Nothing seemingly problematical, other than legs that were still a tad wobbly after their ride through the forest to the Italian church.

A simplification of Heston’s roast chicken in brine. Slow cooked (4 hours @ 90 degrees), after it had sat overnight in brine. A melted butter topping during the cooking. I struggled to keep the temperature of the Kamado Jan that low and took the chicken off after 3 hours, basting it every 40 minutes or so. Succulent, tasty and definitely morish. The only downside, being that you eat far more than you would normally eat! 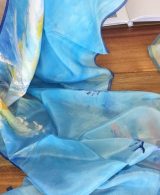 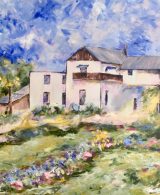