Terry’s dad, and my friend, passed away in the Montagu hospital he once was so passionate about and worked so hard to restore.

He was in such pain and the relief for him was prayed for.

He died, at a similar hour, in the same hospital, and on the same day, as Mum Sterley’s Birthday. I’m sure she called him home.

The number of lives he has impacted, almost impossible to imagine.

I remember when my Dad died and I was stuck amidst the evacuation of Jalalabad. Touched by the number of my Afghan staff who came into my office to pray for the soul of departed. Whom they had never, known, but still respected.

‘King’ acrylic on canvas 2mx0,7m A soft approach for the painting of a King Protea and Cape Sunbird

Summer visitors in the studio. Roger and Marie here from Switzerland. Kirsten here from the States and Aly heading back to France

One of my favourite paintings, ‘Dancing Zebra’s’ from Botswana sold and heading to its new home in Switzerland. 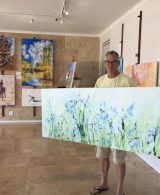 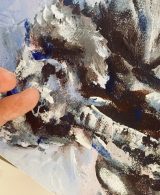