Erica’s in purple and pinks between banks of grey salt-bush alongside the paths through the Forest. Enough rain to turn trails into rivers that extra element of fun.

Colours swirling on the canvas for my painting of the Heads. Getting a tad lost in the water of the estuary.

Bunch of people visiting which gave us the opportunity to try a couple of different places in our part of paradise. The late afternoon ferry out to the rebuilt Featherbed restaurant for their forest dinner. The building spectacular, and while the food might not be memorable there was plenty of variety, even for a diabetic.

Parmesan crusted kingklip, with a chilly/butter stuffing at Fatfish, looked amazing and was delicious. No less so than the tempura-prawn salad, with a great selection of wines by-the-glass. 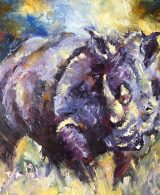 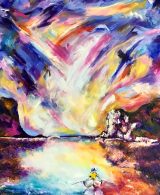