A few tweaks, and a couple of significant changes to the composition of the Rhino.

I decided to leave the tempestuous background, with its rough texture alone, as a contrast the smoother dust in the foreground.

Grateful for the collector who commissioned the painting. Loved the opportunity to work at that scale.

I. Remarkably, no blood! Hugh walked my bike out to where Clare could collect me home before Terry could get me casualty and the operation to fix my ‘properly broken’ clavicle. Fortunately, no complications, and while my blood sugars have gone crazy, they have sent me home after overnight observation. Six weeks, or so, my penance.

Hospital is not without its humorous side. The care I received was of the highest standard and professionalism.

A shared ward with a Dutch tourist who tore a knee ligament, and not only was a heavy smoker but had an absolute phobia about needles. Getting him prepped was a lesson in physiological counseling and slight of hand that was the envy of many magicians.

A nonagenarian woman, cranky in the extreme wanted go for walk outside, throwing he walking frame across the corridor as she doesn’t need assistance. Despite her recent knee surgery. She also decided on her midnight stroll, after insisting on coming into the wrong ward that I was occupying her bed and should be removed immediately.

An early morning tussle with e grumpy man who tried to leave the hospital to go home despite not being able to move unassisted and nobody at home to take care of him. Apparently he couldn’t get the USPGA on his TV screen.

I slept a bunch.

Brief shafts of sunshine through low clouds, natural spotlights highlighting the colours of ‘Wind Scuplture lll’ in the sculpture garden. Definitely best viewed from the warm comfort of the Skotnes restaurant.

Enjoyed the Collector’s Focus exhibition and wondering through the David Goldblatt exhibition, was transported back to my brief, terrifying, stint working at Grootvlei gold mine. While intrigued by the Yinka Shonibare CBE exhibition, Tradewinds’, I struggled to be engaged.

Rowing boats in a clients house 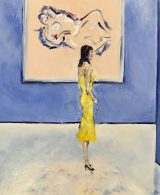 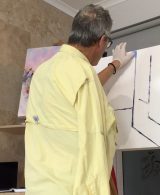