Stopped fiddling with the first painting of Irises and Foxgloves. Wiped some of the paint from the canvas where it felt too heavy, and darkened some of the edges of the various shapes creating the journey through the composition.

Sounds of Spring while out jogging. Burchell’s Coucal calling from the bushes, and Fish Eagle’s against blue skies. Not that the rain has forgotten us, the wind continually trying to tear the doors from the studio.

A dash up to PE to deliver the painting of the Montagu Wild Garden. Stopped at Brioche for breakfast, which was every bit as good as the recommendation. A pulsating atmosphere that has you feeling as though you are in the heart of the kitchen, surrounded by happy, smiling faces. My shoulder not particularly happy with the five hour road trip and I was glad that Craig was with me to drive.

With the new work Terry has taken on for Madison, our days are starting much earlier, which Prince isn’t that thrilled about. 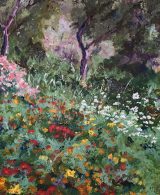