Marathon day. Singing and dancing supporters turning it into a street party, which Prince didn’t appreciate. Especially after another night of lightning storms.

The cheese-based crust (using a different recipe) for the Beef Wellington didn’t hold its shape in the Kamado Jan, resulting in a sort of mush. Fortunately, it still tasted great, but I think that had more to do with the foie-gras than anything I did. Terry did an Otto Linghi avo based salad that was simply scrumptious, served with grilled tomatoes that used a gazillion herbs. A burst of colour and flavour.

Shoulder, doing it’s ’click-and-grind’ after the ride to Buffel’s, on a fabulous morning. Fortunate that my front tyre expired at the top of the hill and not during the decent. Two new tyres needed as both wheels now have punctures where the plugs aren’t holding.

Decided to change the tyres myself as taking it to the bike shop for something so trivial seemed unnecessary. Tyres arrived and I hit the first problem as the tyre tape on the one wheel was damaged and needed to be changed. Thisi also required a new valve, none of which I have. While the wheel was in to have that sorted, I did the other wheel. My shoulder not enjoying the strain of getting the tyre onto the rim, and neither did my hands.

The second wheel was even tougher and despite pumping like a maniac, I couldn’t get the tyre to sit properly on the rim. A visit to the garage provided the necessary oomph, however, the tyre was leaking at the new valve. Enough.

Not the cleverest thing to chose to do when I need my hands to paint with, not bruise them changing bicycle tyres.

Sunrise outer Thesen Island loop 7km run with the high tide next to us. Quite spectacular. 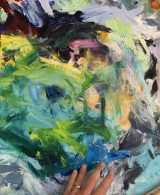 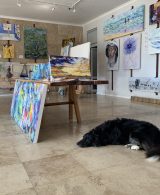