Home. A tad stressful, with pilot having to ‘thump’ the plane down in poor visibility and rain.

The runway in Jozie, flanked by drifts of pink and white cosmos flowers. A sure sign that autumn is approaching. Painted a million times, I’m always a tad apprehensive about finding something new to say. However, the architectural stem shape and archetypal flower structure are timeless. In a similar way, the Japanese Anemones flowering in Mum’s garden.

Root cuttings in the hope of getting them to grow in the small garden behind the studio. The flowers, inspiration for a small painting.

One of the best things you can eat is Cacio e pepe: “cacio” is the local word for Pecorino Romano, a salty, aged sheep’s milk cheese, while “pepe” means black pepper.

The two ingredients are combined with cooked pasta (a keto version using cauli noodles) and a bit of its cooking water, then stirred vigorously to create a smooth sauce. Carbonara a Roma.

Cesar salad, with an anchovy dressing, followed by Saltimbocca a Romano (pork rather than veal) with keto gnocchi and spinach. 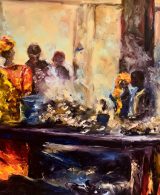